Best of the best - Dacres, Atkinson walk away with RJRGLEANER Sports Awards crowns 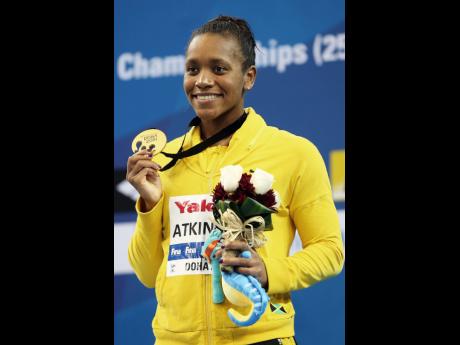 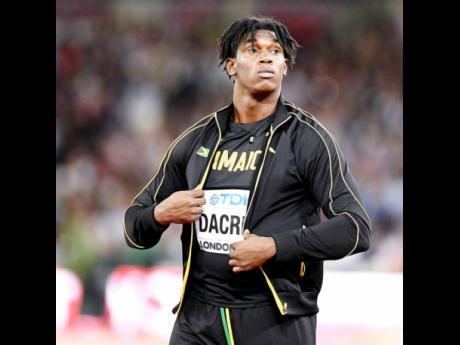 Jamaica's darling of the pool, Alia Atkinson, celebrated a great night at the 58th RJRGLEANER National Sportsman and Sportswoman of the Year Awards at the Jamaica Pegasus, while Fedrick Dacres rubber-stamped his relentless march up the ranks, with a big win of his own.

Atkinson, who continues to rewrite history on the strokes of another career-defining season, celebrated back-to-back success, after walking away with her third National Sportswoman of the Year award at last night's ceremony, while Dacres became only the second field event athlete and first thrower, to win the National Sportsman of the Year nod, following his dominance in the circle last season.

In truth, there was little surprise when the winners were announced, such was the pre-eminence of their achievements in 2018, and for Atkinson in particular; this, her latest accolade, underlines her remarkable consistency over the past few years. The 30 year-old, in the last seven staging of the ceremony, has now won three Sportswoman of the Year awards (2014, 2017, 2018) and finished as runner-up (2012, 2013, 2016) on another three occasions.

Her night, however, got even better, when she was presented with the Iconic Award, in recognition of a career that has not only brought medal success and enriched Jamaica's sporting culture, but also broke racial and social barriers, when she won gold in the 100m breaststroke at the 2014 Short Course World Championships, to become the first black swimmer to hold a world title. Atkinson, who has represented Jamaica at four consecutive Olympic Games since the 2004 instalment in Athens, also holds the short course world record for the 50 metres breaststroke - a feat, which was achieved in early October, 2018, when she bettered her own mark in Budapest, with a time of 28.56 seconds.

While the Iconic Award was sure to have surprised the swimming star, Atkinson must have stepped inside the Jamaica Pegasus ballroom knowing very well that she would leave with the big prize.

She started 2018 with a silver medal in the 50m breaststroke at the Commonwealth Games in Gold Coast, Australia before another strong showing at the Central America and Caribbean Games, where she won three gold medals, two of which came on games record times. She would also show her strength on the global scene, sweeping all five 50m breaststroke assignments at the FINA World Cup, while winning three gold and two silver medals in the 100m breaststroke. She also won two gold medals and a bronze at the year-ending FINA World Championships (25m).

Interestingly, there was a tie for the runner-up position with chairman Mike Fennell and the rest of Selection Committee deciding there was nothing to separate the achievements of triple jumper Kimberly Williams and shot put standout Danniel Thomas-Dobb.

Williams successfully defended her Commonwealth Games title with a personal best mark of 14.64m and claimed a silver medal at the World Indoor Championships. She ended the year ranked as the second best triple jumper on the planet after four podium finishes on the Diamond League circuit and a third-place finish in the final in Zurich.

Thomas-Dodd, continues to show her class in the shot put, throwing 19.36m to win gold at the Commonwealth Games and posting 19.22m for silver at the World Indoor Championships.

Long jumper James Beckford, who won the National Sportsman of the Year award in 1995, 1996 and 2003, finally has some company, after he was joined by Dacres, as the only field event athletes to win the top prize.

Dacres' win also means that athletics continues to rebuild its cache with a fourth straight representative, after boxer Nicholas Walters worked himself in the middle of Usain Bolt's five-year stretch of success, which started in 2011.

The neck-tilting thrower was an irresistible force in the throwing circle, winning at the Commonwealth Games with a record 68.20m heave before racking up wins at the Continental Cup and the IAAF Diamond League final. He won three of his four appearances on the Diamond League circuit, clearly demonstrating his dominance over his peers and threw a national record 69.67m in a season that also saw him win gold at the NACAC Senior Championships in Toronto.

Dacres' success and meteoric rise in the senior ranks takes on new perspective when it's considered that just about four years ago, he was struggling to walk, after damaging the meniscus and anterior cruciate ligament in his left knee.

The runner-up spot went to national sprint hurdles champion Ronald Levy, the Commonwealth Games champion. Levy, who ended 2018 as the third fastest sprint hurdler in the world, finished second at the Continental Cup and also was third best on points in the IAAF Diamond Race in the 110m hurdles event.

Several other awards were presented throughout the night, including performance awards in each sporting discipline.