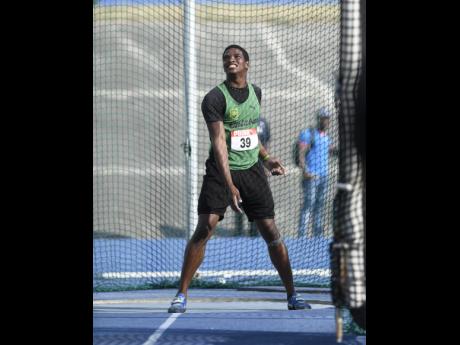 Kai Chang, Jamaica's World Under-20 discus champion, has his eye on a Boys and Girls' Championships shot-discus double and a seat on the plane to Doha, Qatar, for the senior World Championships.

Chang said that he's looking past his big victory last year. His focus now is improving his personal best in both events.

Chang, who turns 19 in two weeks, threw in the men's discus at the Fuller Memorial at Manchester High School on Saturday, January 12, and managed 54.28 metres, well off the winning effort of 64.65 metres by world number one Fedrick Dacres. The six-foot seven inches Calabar High sixth-former wasn't dismayed.

"It's not yet the time or the season to throw the junior discus because as you know, my coach really wants me to spend a lot of time throwing the senior weight so I can have more chances to qualify for the World Championships," he revealed of plans he has made with coach Julian Robinson.

He feels the need for speed.

"I'm really trying to focus on my speed across the circle," he said. "I'm really slow as a tall person, and that's not a good thing," he analysed. "Training with Fedrick Dacres and Traves Smikle really teaches me to embrace the speed," Chang advanced of the benefits he gleans from practice with the men who finished first and second, at the Commonwealth Games and the NACAC Championships, respectively.

Though he is only the second Jamaican, after Dacres, to win a World Under-20 discus title, Chang has put the shock victory in perspective.

"I'm really moving past that," he said calmly. "I'm trying to explore new margins and trying to expand my PBs in both weights." Those marks stand at 62.36 metres to win his world junior title and 57.66 metres with the heavier implement used by the men.

The respective weights are 1.75 kilograms for the Under-20 competitors and 2kg for the men.

Chang is hoping to make a big move forward in the shot put. He wants to help Calabar win Boys' Championships for an eighth straight time although he said, "I really wasn't throwing it a lot last season."

Second to the graduated St Jago High School product Roje Stona in the Class One discus, he was just 10th in the shot.

"Coach used it as a training method, but now I'm taking it seriously, so I'll be contending for the Champs gold medal," he added.

The highest-placed returner to the Class One shot put field is 2018 bronze medal winner Courtney Lawrence of Petersfield High. Lawrence launched a throw of 18.21 metres to reach the podium last year. The athletic Petersfield thrower showed that he won't be an easy target by winning at the January 12 meet with a throw of 18.66 metres. In second, was Chang, with a personal best distance of 17.29 metres.