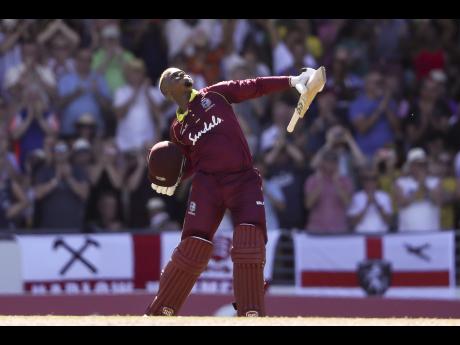 The 22-year-old drilled the penultimate delivery of the innings to the straight boundary to reach his landmark and finish unbeaten on 104, as the hosts finished on 289 for six off their 50 overs at Kensington Oval.

Veteran opener Chris Gayle followed up his hundred in Wednesday’s opener with exactly 50 while Shai Hope chipped in with 33 and Darren Bravo, 24.

However, it was Hetmyer’s innings which proved crucial after West Indies lost vital wickets at critical stages.

He faced 83 balls and belted seven fours and four sixes, putting on 76 for the fourth wicket Bravo and an unbroken seventh wicket stand of 52 with Ashley Nurse (13 not out).

Once again, the Windies started slowly but soundly, with Gayle posting 61 for the first wicket with John Campbell who made 23 before gifting his wicket in the 13th over, lifting a catch low to mid-on off seamer Liam Plunkett.

Hope again looked in good touch with a four and two sixes in his 45-ball stay but he too gifted his wicket when he picked out Jonny Bairstow on the mid-wicket boundary off seamer Ben Stokes in the 26th over.