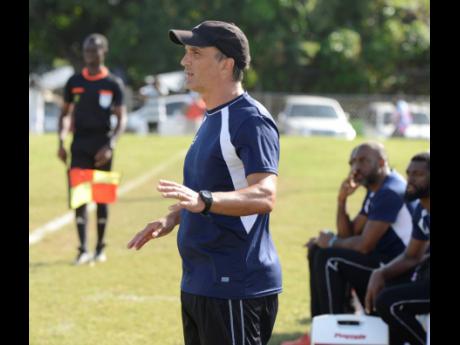 Luciano Gama, Montego Bay United’s Brazilian coach, says his knowledge and experience of Jamaican football give him an advantage in his effort to try and save the former champions from relegation.

Gama, the son of former Jamaica technical director, Dr Walter Gama, was also the coach of the national Under-20 team during the 2012-2013 Concacaf qualifiers, and he believes his time in Jamaica will greatly assist him in plotting MoBay’s survival.

“First of all, we have a history with Jamaica, from 1995, so every time there is an opportunity to come to Jamaica, we are very happy. It was a dream to be here and live in MoBay, it’s a beautiful city and it’s a place that we love. Now I have that experience, I know about the facility of Montego Bay, they have a good condition to practise and to play, they have a lot of good players in the region and so (that) was one of the things I think to accept the job.

“But it helps a lot. I know every situation that I will find here in Jamaica, I know all the fields, all the venues, I know the ways Jamaicans play and the way they face the game, so it helps a lot because I don’t come here blind. It’s an advantage and that’s why I accept (MoBay job), because I know what I am going to face here,” Gama commented.

Gama has helped MoBay to two draws from two games. Since he arrived, and he believes the league is just as tough as when he was last here.

“The league I don’t see too much yet, but like every time, Portmore, they have a good group. I am surprised about the position of Harbour View, they always have a good team also, but we know that every year they change the guys at the top, they change the guys at the bottom also. But each year you have to fight to be here and when things go bad in the middle of the table, you don’t progress and we found ourselves in that situation.

“But if they were not in that situation, maybe I don’t come, so I must find a lot of hope, hope in my work, hope in the talent of the boys and the team to take out the team (from relegation),” he said.

Gama is contracted until the end of the season, but he says if the right offer comes for him to stay, it wouldn’t be a difficult choice.

“I am here just till the finish of season, but always we have that hope (of staying). My daughter loves Jamaica, my wife love it here, so if the invite come, we are going to analyse very carefully like we did before, and I think if it is good, it is very easy to stay in Jamaica,” he concluded.