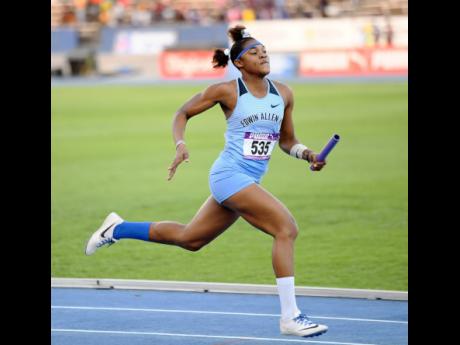 Ricardo Makyn
Britney Bridge anchors the Edwin Allen High team to victory in the girls’ Class Two 4x100 metres at the Gibson McCook Relays, held at the National Stadium on Saturday, February 23. They crossed the line in a record 44.75 seconds.

The recent Gibson McCook relays provided an exciting preview of what is to come at ‘Champs’ this year. Our children have once again revealed to the world exactly why Jamaica is recognised as the athletics powerhouse that was first revealed to the world in the 1948 Olympic Games. Usain Bolt and Shelly-Ann Fraser-Pryce led a group of Jamaicans, who removed the moat from the eyes of anyone who continued to believe that the mighty USA ruled the roost when it comes to sprinting.

The standout performance for me, was the running of the 4x100 metres relay for Class Three with the quartet from Edwin Allen completing the distance in a time of 44.59 seconds! The team from Edwin Allen included the twins, Tia and Tina Clayton. Anyone who does not believe that our superiority lies not only on the excellent training (and a diet that includes yam) that our children receive but also on genetics, needs to rethink their theory as to what makes Jamaicans so special. The enforced union (during slavery) of the strongest and most rebellious of the Africans brought to the West Indies by European slave traders, resulted in the genetic make-up of “Jamaicans” that have conquered the world of track and field.

The stars on show at the Gibson McCook Relays are at different stages of their preparation for ‘Champs’ and international competition later this year, so the remark made by a high school coach that “we ain’t seen nothing yet” augurs well for the future, making those who were worried about our continued domination after the retirement of Usain a lot calmer. The Edwin Allen Class Two 4x100m relay had the sprinting prodigy Kevona Davis running the second leg down the National Stadium backstretch in a manner that strongly suggests that she has put her injury woes behind her. If only she could be managed (this year) in a manner that recognises the fact that she is a national treasure and needs to be handled as such, thus confirming her projected dominance of female sprinting in the world!

There were multiple other numerous ‘dazzling’ performances, too many to mention in a column, but to those at the stadium who wanted to know who is Chad Walker, the anchor runner of the MVP team that won the Club event in an impressive sub-39 second time, watch this space.

However, as we bask in the excellence of the performance of our children, let us not forget that there seems to be a genuine bias when it comes to the allocation of scarce resources as we prepare our children (and adults) for competition.

Out on the west of the island, there is a Mondo track at the Montego Bay Sports Complex.

The surface was laid in 2002. As with other similar surfaces laid in the National Stadium, the G.C. Foster College of Physical Education and Sport, and the training surface at Stadium East, there is a ‘life expectancy’ of about eight years.

This surface is still being used in 2019! The surfaces at the Stadium East, G. C. Foster and the National Stadium have been resurfaced, while the surface in Montego Bay has not had even an attempt at mending.

I am told of injuries that some athletes suffered while using the track last year that prompted the organisers of the Milo Western Relays to move this year’s renewal to the G. C. Foster track where, even though transportation and logistics costs to the entrants from the west were astronomical, the meet was successfully completed.

The Western Championships for high school athletes also had to be shifted, this time to the grass track at St Elizabeth Technical High School (STETHS).

This unacceptable state of affairs would appear to give the children from the much-favoured and newsworthy central and Corporate Area schools a distinct advantage.

I am positive that this is not a deliberate and well-thought-out government strategy, but the question must be asked: Why is there not a national movement to repair or relay the track at the Montego Bay Sports Complex?

The answer should include a timeline for repair of the surface thus giving our soon-to-be-national treasures from the west a level playing field, as they prepare for local and international competitions.

All it needs is a prioritisation of the allocation of resources, considering the health of our children.