Bonner, Palmer Jr to the rescue 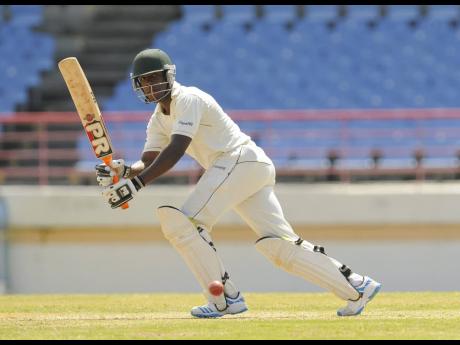 A brilliant sixth-wicket stand of 169 between Nkrumah Bonner and Paul Palmer Jr spared the blushes of the Jamaica Scorpions and has left their Regional Four-day Championship game against the Barbados Pride fairly evenly poised going into today's second day. At stumps yesterday, the home team reached 218 for seven after being asked to bat. The two came together with the score on 27 for five, with opening bowlers Miguel Cummings and Markino Mindley threatening to dismiss the Scorpions for less than the 75 they made when the two teams met in the first round.

It was a tale of woe for the first five wickets. Kennar Lewis, for his third straight innings, was out off the outside edge for six to a ripper off an away swinger from Mindley. Garth Garvey, called back to the team after three straight hundreds in club cricket, got a great ball from Cummings that found the edge through to the wicketkeeper. He made only one. Brandon King was given out leg before wicket to Cummings to one that cut back in and went for nought. Jermaine Blackwood played with bat away from body and was snapped up at second slip for five, while Assad Fudadin drove carelessly down the throat of mid off and was gone for one.

It could have ended up being embarrassing for the Scorpions at that point, but Bonner and Palmer Jr set about repairing the damage, first with resolute defence and as they gained confidence, some rasping stroke play. Bonner was especially impressive. Playing in his first game of the season, he demonstrated the kind of technical acumen that has mostly eluded the Scorpion batsmen in the tournament so far. It was easily the most impressive innings by a Scorpions batsman at home all season. He was only three runs short of his century when he played around a straight one from Jonathan Carter and was out leg before wicket. His knock included 13 majestic fours off 202 balls.

Palmer Jr never played his most fluent innings, but he stuck around manfully for 66 from 204 balls before he drove loosely at Roston Chase and was caught at slip. Derval Green and Jerome Taylor will resume on eight and four, respectively.

Mindley looked lively and got the ball to do a bit. He grabbed three for 36 from 15 overs. There was a wicket apiece to Miguel Cummings, Carter, Shemar Springer, and Chase.

AT SIR VIVIAN RICHARDS STADIUM: Leeward Islands Hurricanes, replying to Windward Islands Volcanoes’ 200 all out, reached 132 for four at the close.