Pride in charge at Sabina Park 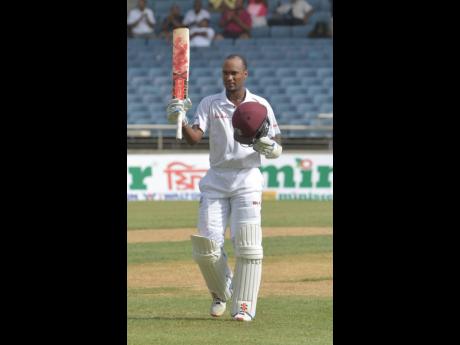 Visitors Barbados Pride held the upper hand at stumps on yesterday’s second day against the Jamaica Scorpions in their Regional Four-day Championship game at Sabina Park. Replying to the home team’s first-innings score of 250, the visitors will resume this morning on 233 for five.

The Pride owe their fairly good position to some solid, if unspectacular, batting. Jonathan Carter is the leading run-scorer so far with a defiant unbeaten 68. He has so far faced 122 balls and hit 10 fours while keeping his team in front. He will resume this morning with wicket-keeper Tevyn Walcott, who looked composed for his 16 not out. Kraigg Brathwaite was his usual stubborn, resilient self and contributed a patient 57 from 132 balls. Opener Shane Moseley was a little bit more adventurous, getting 40 from 75 balls.

Bowling for the Scorpions, Derval Green again impressed with two for 37. Both wickets were helped by brilliant catching from Kennar Lewis, who was given the gloves in this his second regional four-day game. Nikita Miller toiled away to take two for 45 from 24 overs. The other wicket taker was Akim Frazer, who got one for 75.

Earlier in the day, the Scorpions added 32 runs to their overnight 232 for seven with Derval Green left stranded on 27 not out. Miguel Cummings ended with three for 37, while Markino Mindley also finished with three for 36.

AT SIR VIVIAN RICHARDS CRICKET STADIUM: Windward Islands Volcanoes, trailing Leeward Islands Hurricanes by 61 runs on first innings, were 91 for five in their second innings at the close.