Thomas leading the way for Dunbeholden 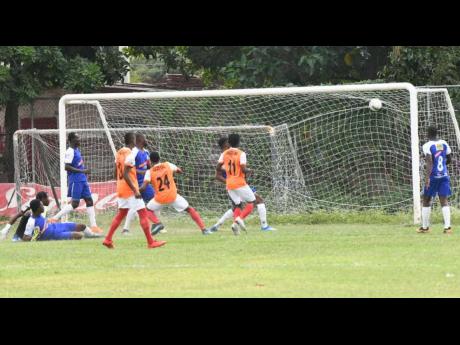 Rudolph Brown
Dean-André Thomas (24) scores the opening goal for Dunbeholden during their 3-0 win over Reno in the Red Stripe Premier League on Sunday. The match was played at the Royal Lakes Sports Complex in St Catherine.

Dunbeholden’s fight for survival in the Red Stripe Premier (RSPL) is being spearheaded by forward Dean-André Thomas, who bagged a brace on Sunday as the St Catherine club eased to a 3-0 win over former champions Reno.

Thomas has been the lynchpin of the Dunbeholden attack, both as a creator and scorer, and although he is some way off the 15 goals he targeted in his debut Premier League season, he is hoping to get close to that number with three games left in the regular season.

“I am on eight goals and seven assists this season. The work that I am putting out in training is paying off, so I have to give God thanks. But I think I can do better.

“The target for the season was 15 (goals) and I can still get there. Today (Sunday) was the match I wanted to use and get to 12. If I was not substituted, I felt that I would have scored three to four goals; I was in that frame of mind. However, the coach took me off and said he was saving me. It’s his decision, so I had to come off,” Thomas said.

Although things have got better for the striker at this late stage of the season, he still believes he is yet to deliver his best form. “In the first part of the season, I was getting a lot of chances, but not putting them away, but I worked on that in training and came back and did what I had to do and started scoring some goals,” he said.

With three matches to go in the regular season, Dunbeholden are eighth in the standings with 32 points and they need just five points from the nine available to secure their RSPL status.

“We have to go back to training and work hard because those three matches will be difficult. We have the football skills already; we just have to put in more running and work on the physical side of things,” Thomas added.

“If I get even three or four goals in those last three games, I would appreciate it, because in most games I am creating chances for others. I don’t have a person to set me up. I am just hoping next season can be a better one for me. The current season could have been better, but I still give thanks for where I am right now,” he said.