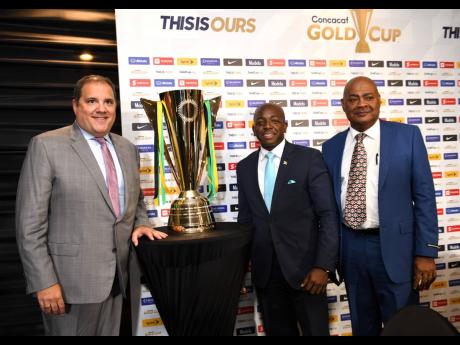 Ricardo Makyn/Chief Photo Editor From left: Victor Montagliani, Concacaf president, Senator Pearnel Charles Jr, Minister without Portfolio in the Ministry of Economic Growth and Job Creation and Jamaica Football Federation (JFF) president Michael Ricketts pose with the trophy during a press conference at The Jamaica Pegasus yesterday to announce Kingston, Jamaica as a host for this year's Concacaf Gold Cup.

Jamaica Football Federation (JFF) president Michael Ricketts is convinced that the opportunity to host matches in this summer's Concacaf Gold Cup, will go a long way in developing the sport here in Jamaica.

Concacaf President Victor Montagliani yesterday announced at a press conference at The Jamaica Pegasus, that Jamaica will create history, by becoming the first Caribbean nation to host matches in the tournament, with a double-header confirmed for the National Stadium on June 17.

The 2019 edition of the tournament will be staged across 14 cities in the United States, San Jose in Costa Rica and of course, Kingston, Jamaica.

The announcement means that the region's premier competition featuring nations from North America, Central America and the Caribbean, will be heading to the Caribbean for the first time in its 15 instalments and Ricketts believes this will give the national programme additional goodwill going forward.

"We are very excited by what we can achieve after this Gold Cup," said Ricketts. "I have always insisted that this JFF has one item on its agenda and that is to grow the sport of football. This will give us international exposure, as it is the first a Gold Cup game will be played in the Caribbean. But Jamaica being chosen means we are recognised around the region and we want to keep that respect and grow football."

Meanwhile, Montagliani said he was excited about the development and highlighted the news as a major moment for football in the region.

"I am very excited to announce that the Concacaf Gold Cup will be held for the first time in 15 editions here in Jamaica. This is the first time in the tournament's history that matches are being played here in the Caribbean. This is truly a watershed moment for football in the Caribbean, for Concacaf and for Jamaica. The National Stadium will be a stage for the biggest football competition in our region and this summer's Gold Cup will be the biggest with 16 countries vying for the glory for our region," said Montagliani.

The regional football boss also clarified that in keeping with convention, the country will be hosting a double-header and not be hosting the entire Group C schedule.

Group C will feature seeded team, Honduras, Jamaica and two other teams that will be selected at the Gold Cup draw in Los Angeles on April 10, and Jamaica will play one of those team in one game, while the other two will meet in the other match.

While some were disappointed that they will not be seeing more Gold Cup games, Montagliani, said a double-header for each city is a tried and proven format and they have no reason to change it now.

"It will be a double-header, two games," said the official.

"Jamaica will play Honduras or one of the two other teams. In the Gold Cup, no city, including those in the US, host a group and that's for a long time now. Each group play in three cities. This group will start in Kingston, then we will move on to another city for the second games and then a third city for the third games. So we will have a double-header here, a double-header at the second venue and a double-header at the third venue. Even a city like Los Angeles will not host a group, they will only host a double header," Montagliani stated.

"That has been the format of the Gold Cup for a long time, as long as I can remember. Economically it's good for us and, and it has worked so well for us that even UEFA has adopted the same system for their Euro's next year, so we must be doing something right for people way across the pond are emulating us," he reasoned.

Jamaica boasts a rich history in the Concacaf Gold Cup. The country made it to the final in 2015 and 2017 when they were beaten by Mexico and the United States respectively. Jamaica also finished third in 1993 and fourth in 1998.