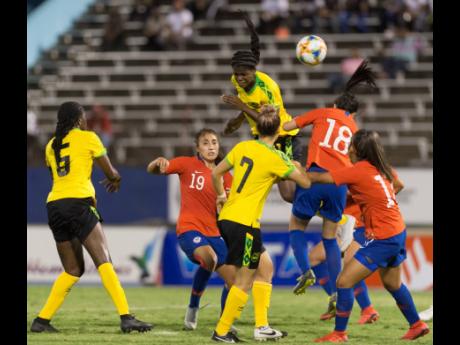 Gladstone Taylor
Jamaican striker Khadija Shaw (top) gets high to head to goal during the first international friendly against Chile at the National Stadium on Thursday, February 28, 2019. The Reggae Girlz won 1-0. File

The team is still preparing for its historic debut in the FIFA Women’s World Cup this June, and Menzies has not yet decided on his final squad of 23 players for the trip to France. But he says that this game presents the last opportunity for those looking to break into the team to prove their worth.

“We made it very clear to the group coming in here that for some of them, it’s their last opportunity to showcase themselves, not only in the game, but also in training,” Menzies said. “So they understand the importance of every event, every session we have here. It’s part of their evaluation: narrowing down things as far as the squad is concerned. We have a good idea of the nucleus of the group, but it’s that tail end that we feel needs to be strong because at the World Cup, we need to have 23 players to get through to that first group, and then, hopefully, move on to the next round of the World Cup.”

The Reggae Girlz, ranked 53rd in the world, are coming off 1-0 and 3-2 wins against Chile in Jamaica and have now moved on to an unfamiliar environment for a new test.

Meanwhile, the South Africans, or ‘Banyana Banyana’ (Girls Girls) as they are nicknamed, are seen as being of similar calibre as they are ranked 49th in the world. The hosts also played Chile recently but did not give as good a showing, having lost 2-1 before drawing 2-2 in both games played in South America.

Their coach, Desiree Ellis, says she has been keeping track of Jamaica’s progress and believes that she has scouted Menzies’ team well enough to get a positive result.

“During the qualifying tournament (in CONCACAF). We watched a bit, we’ve also watched a bit of the games against Chile, so we may know their strengths and weaknesses, and we may have to come up with a game plan,” she said. “We analyse, and likewise, the opponent analyses us as well, but if you analyse too much and forget about what your team needs to do, then, you know, you don’t get the result you want.”

Menzies is expected to rotate his squad, much like he did against Chile, and either Sydney Schneider or Nicole McClure could start in goal, with captain Konya Plummer partnered in defence by Allyson Swaby. Lauren Silver and either Dominique Bond-Flasza or Christina Chang could complete the starting backline with Marlo Sweatman, Chinyelu Asher, and Giselle Washington in midfield. However, centre midfielder Havana Solaun had a classy second-half cameo in Jamaica’s last game, showing good passing and control over the ball while dictating the tempo of the game. It would not be a surprise to see her feature at some point in the game, if not start. Up front, star striker Khadija ‘Bunny’ Shaw is expected to be partnered by youngster Jody Brown and Deneisha Blackwood, while 17-year-old Olufolasade Adamolekun could come in off the bench.

For Banyana Banyana, Kaylin Swart may start in goal, with Lebohang Ramalepe, Nothando Vilakazi, and captain Janine van Wyk ahead of her in a three-woman backline. Melinda Kgadiete, Linda Motlhalo, and Thembi Kgatlana could also be joined by Bambanani Mbane and Rachel Sebati in midfield, with Refiloe Jane and Kholosa Biyana in attack.