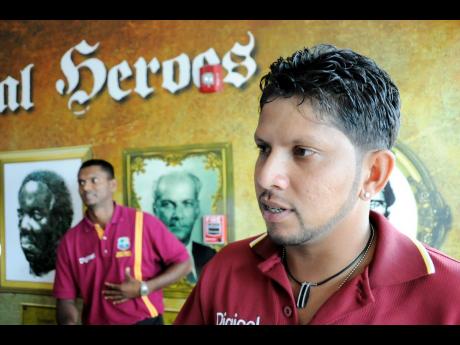 Former Test batsman Ramnaresh Sarwan says he is thrilled at the opportunity to work with the West Indies one-day squad in the lead-up to the Tri-Nations Series in Ireland and the ICC World Cup.

The 38-year-old joined the ongoing preparation camp here at 3Ws Oval at the invitation of director of cricket, Jimmy Adams, and says he will be lending as much of his expertise as possible in order to help improve the Caribbean side’s batsmen.

“I have come here to act as kind of a mentor to the players and try my best to assist them in any technical ways and with any shortcomings where I think they can improve, and to offer as much help to the head coach, Floyd Reifer, and his coaching staff,” said Sarwan, who averaged 40 from 87 Tests with 15 hundreds and was also good enough to average 42 in 181 one-dayers.

“I am very excited to be here. When I received the call from Jimmy, I was very overwhelmed at being asked to assist West Indies cricket again. I am really grateful for the opportunity and I am looking forward to sharing my knowledge with the players, even though it will just be a few days, and hoping it will help them in some way or other.”

West Indies have struggled in ODIs in recent years and have slipped to number nine in the ICC rankings, but showed great character to hold world number one England to a 2-2 draw in a five-match series in the Caribbean last month.

And even though the batting group posted record totals, Sarwan said even further improvement was possible, especially in the area of strike rotation.

“I know our batsmen have struggled in the past with rotating the strike, so I am trying to see how best we can get them to improve in this area,” said the Guyanese, who was part of the last West Indies side to win a 50-over world title with the capture of the ICC Champions Trophy in 2004.

“It’s not an overnight fix, but it’s important to share ideas with them, so that they have something to build on.”

“It was very important to have him here. Sarwan was a player that was outstanding for West Indies. A very good batsman. A very good ‘finisher’ in limited-overs matches,” explained Reifer, himself a former Windies Test batsman.