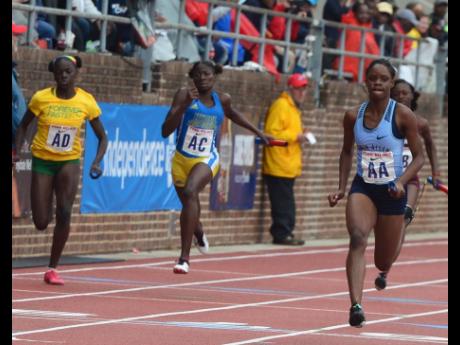 Edwin Allen High School stole the show at yesterday’s second and penultimate day at the 125th staging of the Penn Relays (Penns) at Franklin Field in Philadelphia, Pennsylvania, with their young 4x100m relay team giving a five-star performance. The quartet produced an impressive record run of 43.62 seconds to erase their old clocking of 43.96 seconds, which stood for two years.

The team, consisting of Class Two girl Kevona Davis, Serena Cole, Tia Clayton, and her twin sister Tina, all Class Three runners, came into the meet as overwhelming favourites to win and lower their own record. They did not disappoint.

After heavy and frigid rainfall with persistent lightning earlier in the day, resulting in the meet being stopped for 45 minutes, conditions improved for the final of the event, and Michael Dyke’s team warmed the atmosphere with a magnificent performance.

Despite a slight fumble between Cole and Davis on the first exchange, the latter lit up the second leg with a big run to give Tina the lead on the third leg, allowing her to open up the gap to hand off to sister Tia on anchor. Tia turned on the after burners, pulling away from her rivals for a big win, as Jamaican teams took the top six positions. Hydel High School clocked 44.69 seconds for second, St Jago High School, third in 44.78, Holmwood Technical clocking 45.04 for fourth, Excelsior High School with a time of 45.75 for fifth, and St Catherine High School’s 45.99 seconds placing them sixth. The other Jamaican team in the final, Rusea’s High School, were ninth in 46.89 seconds.

Dyke said he was concerned about the weather earlier in the day, but it changed at the right time for them.

“Based on the team we put together, I had no doubt about winning the race despite a little fumble on the first exchange,” he said.

Davis who was part of the record-breaking team in 2017 waa very modest about her team’s success.

“This record run was no different than 2017, as like then, we were determined and had the drive to go and do well,” she said. “The time was fast, but I had expected a faster time, but the weather was a bit bad.”

Edwin also had an easy victory in the 4x800m as the quartet of Jessica McLean, Kayan Green, Nadine Rose, and Rushana Dwyer stopped the clock at 8:54.02 minutes for the school’s first win in seven years, also their fifth victory in the event at Penns. Union Catholic, from New Jersey, were some distance away in second, clocking 9:00.36 minutes, while Noumann Goretti (9:03.97 minutes) of Philadelphia were third.

After Danielle Sloley’s win in the girls’ shot put the previous day to give Immaculate Conception their first success at the carnival, it was more success for the team yesterday. In the consolation 4x100m International final, a brilliant anchor leg from Gabrielle Lyn, following on from the hard work of Onanda Lowe, Shanelle Honeywell, and Shanelle Riley, caught The Queen’s School’s anchor runner Donnell Hartley on the line to give her team the win in 46.32 seconds. Queen’s were second in 46.35 seconds. Petersfield High School (46.39), Vere Technical (47.05) and Papine High School (47.67) were third, fourth, and fifth, respectively.

Kingston College (KC), the 2016 champions, sent out a strong message to rival teams after the preliminary round of the boys’ 4x100m relay yesterday.

With a lightning start from sprinter-hurdler-long jumper Wayne Pinnock, KC stopped the clock at 41.05 seconds to win their heat, posting the fastest time on the day. Other members of the team were Roshaun Rowe, Shacquille Lowe, and Oshane Peart.

St Jago, which included sprint hurdlers Rasheed Broadbell and Vashaun Vascianna, won their heat in 41.40 seconds to be the second-fastest qualifiers. Four other Jamaican teams in Wolmer’s Boys (41.57), Rusea’s (41.62), Jamaica College (JC, 41.66), and defending champions Calabar (41.71) are through.Defending 4x800m champions Calabar stayed on course to retain their title in the event following preliminary-round action after winning their heat in 7:41.62 minutes to be the fastest qualifier for today’s final.

Calabar High discus thrower Kai Chang continued his winning form. Fresh off his win at the Carifta Games last weekend, Chang won his event here with a throw of 66.42m. Daniel Cope of Petersfield was second with 59.42m, while Ralford Mullings of Kingston College was fourth with 56.92m. Today’s action among the boys will get under way at 8 a.m., with the 400m Hurdles Championships of America, with a host of Jamaican athletes, led by KC’s Romel Plummer, the number-one seed in the event.