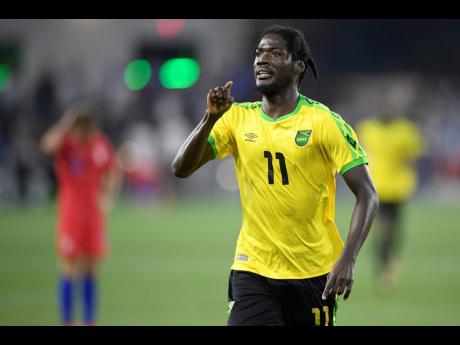 Nick Wass
Jamaica forward Shamar Nicholson (11) celebrates his goal during the second half of the team’s international friendly match against the United States yesterday in Washington. Jamaica won 1-0.

Shamar Nicholson scored the game’s only goal just five minutes after coming on against the USA, giving the Reggae Boyz a morale-boosting 1-0 win over their opponents in an international friendly at Audi Field in Washington, DC, yesterday.

The Jamaicans had created the better chances up to that point, even though the hosts were better in possession in the first half. But the Boyz slowly grew into their game, and in the 60th minute, the NK Domzale forward hit a stunning strike from outside the area that beat Zach Steffen in the USA goal, all ends up.

Joshua Sargent had the first chance of the game, but he could not keep his header on target, while Peter Lee Vassell came close for Jamaica on 12 minutes when he tried to beat Steffen from in his own half. Moments later, Vassell blocked a pass from Steffen, but an alert US defence denied the Jamaicans a shot on goal, and the chances disappeared. They also had to be alert on 15 minutes when Maalique Foster played in Vassell, but his shot was blocked.

Alvas Powell had the Boyz’s best look at goal in the 35th minute, but the defender could only head Kemar Lawrence’s cross over the bar. Minutes later, Kevon Lambert’s low strike from 18 yards was also saved by Steffen, as the Jamaicans continued to put pressure on their hosts.

The Reggae Boyz continued where they left off in the second half. Dever Orgill, played in place of Kevon Lambert, who hit a fierce shot that Steffen parried wide. In the 54th minute, Vassell curled an effort just wide from 20 yards.

The visitors got their reward when Nicholson, who entered the game in the 55th minute, picked up a ball outside of the box and made room for himself before unleashing a cracker past Steffen.

The USA nearly got a goal back on 70 minutes from a corner, but Sargent placed a sitter wide of the goal from six yards. Mihailovic almost equalised in added time when he broke away, but an alert Damion Lowe saw the danger and stopped the attacker before he could strike.

Bayer Leverkusen star, Leon Bailey, did not make his senior debut as expected, due to a slight injury, it was reported.