Reggae Warriors too good for Hawks 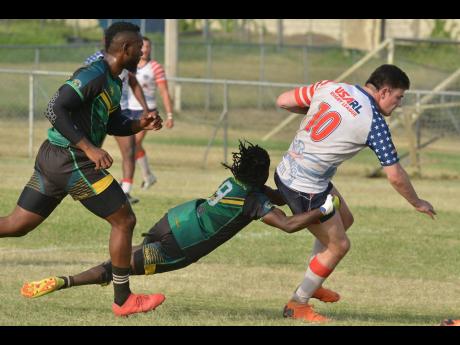 While pleased with the 26-24 win over the USA Hawks at The UWI Mona Bowl on Saturday, Jamaica Reggae Warriors head coach, Romeo Monteith, said there is still a lot to work on with his charges.

The win was Jamaica’s second over the powerful Hawks in eight meetings. The match was played on the International weekend of rugby league and was historic in nature as it marked the Hawks’ first visit to Jamaica. But Monteith was focused on other matters.

“The contest was excellent throughout, though there were many errors,” he said. “The intensity of the fight in the heat and the never-say-die attitude of both teams thoroughly entertained the crowd. It’s a pleasure having the US team here for the first time, and we look forward to welcoming them again and our future battles. The crowd was awesome, and rugby league was the winner.”

The Jamaicans started the game nervously, failing to clear their half on their third set of six. This gave the Hawks an excellent field position at the handover. The US then powered up the middle with their powerful forwards before scrum half Charlie Jones aimed a sweet cross-field kick into the waiting arms of winger Tristan Sylk for an easy try. Jones then slotted the extra two points for a 6-0 lead.

The Jamaicans held their composure and found the response a few minutes later when speedster Adrian Thomas gathered a bouncing long pass from Fabion Turner and raced in on the left edge to see Jamaica trail 4-6.

The Warriors went 10-6 up immediately after the restart when hooker Akeem Murray broke the defensive line and unloaded to Ryan Grant for his first. Chevaughn Bailey kicked the conversion to put the home team 10-6 ahead.

The ding dong battle continued as USA scored the next two tries; first, second row Jamil Robinson found acres of space in a fractured defensive line on the right edge and minutes later, debutant Kevin Wathen got in untouched under the posts. Alex Foster kicked both conversions to put the Hawks ahead 18-10, but Jamaica struck back just before the half ended when powerful centre Kevin Thomas released fullback Kenneth Walker on the right edge to score and leave the home team trailing 14-18 at the break.

The Jamaicans took control of the second half with an early try from substitute Jenson Morris, who broke from the back of a scrum and muscled his way over the try line on the right edge.

Grant then followed up with his second try of the game on the same right edge with a strong run and fend. Prop Mohnejo Thompson kicked both conversions to put the Warriors in charge 26-18.

The Hawks never gave up and were rewarded when Jones sliced through the middle for a try with six minutes on the clock, Foster again converting to see the US trail 26-24, and that is how it ended, with the Jamaicans securing another tight win.

USA Hawks team manager Billy Neilson said it was a tough loss but a great game.

“The boys on both sides played their hearts out, and the crowd was awesome,” he said.

“Congrats to Jamaica, and we look forward to running it back.”