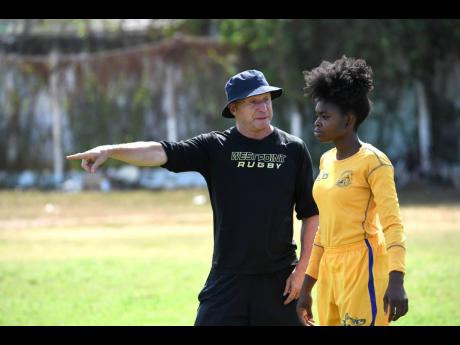 Excited after his recent appointment as the new head coach of the Jamaica rugby union team, Stephen Lewis found his immediate plans to guide the women’s team into the Olympics significantly harder, after World Rugby’s decision to remove the automatic qualifying spot from the North American region.

Traditionally, the victor of the Rugby Americas North (RAN) Sevens competition would be assured a spot into the upcoming 2020 Tokyo Olympics, with the runner-ups playing in the repêchage play-off. However, after a controversial decision by the World Rugby organisation, that spot was taken away from the women’s competition.

The quota was promptly reallocated to the repêchage play-off tournament.

“I think it’s a travesty. It’s a disgrace. It was not an (International) Olympic (Committee) decision but a World Rugby decision,” a disgruntled Lewis fumed. “I think it’s unfair to change the qualification rules after the start of the competitive cycle.”

This was a sentiment echoed by the chairman of the Jamaica Rugby Football Union, Jerry Benzwick.

“To coin a phrase that two of my coaches had said to me, ‘It’s like you move the goalpost in the middle of the game’, because the rationale for it is unfair, if you ask me,” Benzwick explained. “This is the Olympics we’re talking about. Once you’ve qualified through the correct process, then you deserve the chance to go.”

World Rugby explained that the reason for the decision was due to the fact that Canada and USA have already earned qualification from the region through ranking in the top four of the World Rugby Women’s Series.

Benzwick, however, believes this decision was hypocritical, as the other teams that ranked in the top four teams were Australia and New Zealand, both from the Oceania region, yet they had not lost their quota.

“It feels like they are saying, ‘You’re a little child, so you should stay in your corner and play with your toys.’ I don’t like it,” Benzwick said. “They’re potentially killing the best opportunity for the region to explode with rugby.”

Sasha-Gaye Green, the captain of the Lady Crocs, has been directly affected by this decision as a player, but despite the adversity, she believes that this is an opportunity for the team to prove itself capable.

“I’m very disappointed with that, because they think that we’re not ready for the big scene,” Green said. “But we’ll use that as a push for us to show them what they should think of our quality of rugby.”

The Lady Crocs will compete in the RAN Sevens tournament this weekend in the Cayman Islands. The top two teams from the RAN Sevens will then play at a 12-team qualification tournament alongside two runners-up from each of five continental tournaments. The winner and runner-up of this tournament will advance to the Olympics.