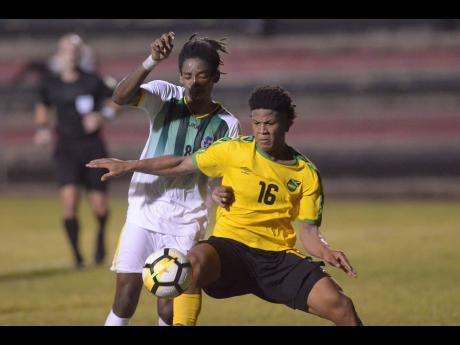 Jamaica started their Olympic qualifying campaign with a 1-1 draw against Dominica at the Anthony Spaulding Complex yesterday. The result leaves both teams tied on one point after one game.

Daniel Green had Jamaica’s first chance after seven minutes but he could not turn Deshane Beckford’s low cross on goal as Jamaica controlled the opening minutes of the contest. They forced the visitors on the defensive, but could not break down a stubborn a disciplined Dominica defence. The Jamaican defence didn’t have much to do themselves in the first half, and as they searched for the opener Kevin Lambert headed over from a corner.

Two minutes later Beckford tested goalkeeper Elle Tafari with a rasping shot from an angle and moments later, Beckford and Tyreek Magee combined well, but the latter could not apply the finishing touches to a well-worked move.

Ricardo Thomas then picked out Green, who could not keep his header down. Green also found the back of the net in the 33rd but was ruled offside.Dominica proved far more efficient, scoring on their first real attack, when Jamaica could not clear a corner and Cuffy Reon fired an effort through the crowd, which blindsided Jamaican goalkeeper Jaedin White, who could only parry the ball into the path of Jno Hope Tobi, who scored from close range. Jamaica will next face St Kitts and Nevis on Sunday at the same venue at 6:30 p.m., while Dominica and St Kitts and Nevis will play each other 4:30 p.m. tomorrow, also at the Anthony Spaulding Sports Complex.

The goal rattled the home team who struggled to rediscover their hold on the game.

However, nine minutes after the interval, Nique Daley, who came on as a substitute, stabbed home a cross from Alex Marshall for the equaliser.

The Clarendon College forward had two great chances afterwards to give Jamaica the lead, but he kicked wide and then to the keeper from close range.

Despite pushing the opponent on the backfoot for the seven minutes of added time, the locals failed to capitalise on their territorial dominance and had to settle for shared spoils.