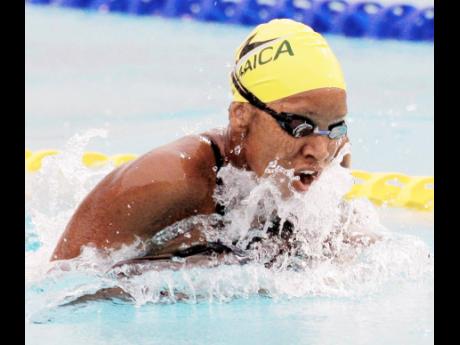 Jamaica’s swimmers got off to a difficult start as the FINA World Championships continued from the Nambu International Aquatics Centre in Gwangju, South Korea, yesterday.

Olympian and national record holder Alia Atkinson failed to advance to the final of the 100m Breaststroke after finishing tied for fifth in her semi-final along with Switzerland’s Lisa Mamie with a time of 1:07:11 seconds. Atkinson, who finished third in the event in 2015 in Kazan and is the defending short-course champion, was outdone by a fast second semi-final in which five swimmers qualified with times of 1:06 seconds or better. Olympic and World champion Lily King from the United States headlines this morning’s final along with Russia’s Yuliya Yefimova.

King is the favourite for the event and is seeking to join Luo Xuejuan of China, Leisel Jones of Australia; and countrywoman Rebecca Soni as the only women who have won titles at successive World Championships. Should either King or Yefimova win, they could join those same women as those who have won two world titles at the event. Atkinson returns to the pool on Saturday to ­compete in the 50m breaststroke.

The reigning world champion, Sun Yang of China, advanced comfortably to today’s final looking to join Germany’s Michael Groß (1982, 1986), Australia’s Ian Thorpe (2001, 2003), and swimming legend Michael Phelps of the United States (2005, 2007) as the only men to have won multiple world titles at the event and to have won at three consecutive major championships.

Sun Yang won gold at the event in the 2016 Olympic Games in Rio and the 2017 World Championships in Budapest.

Gunning will have an opportunity to improve his performance as he will ­compete in his pet event – the 200m Butterfly, which will get under way tonight local time.

Fellow Jamaican Keanan Dols will make his senior championship debut tonight in the preliminaries of the 200m Individual Medley (IM) event and will also compete in the 100m Butterfly on Friday. Chase Kalisz of the United States is the ­defending World Champion in the 200m IM with a life-time best time of 1:55:40 seconds.

Meanwhile, President of the Aquatic Sports Association of Jamaica Martin Lyn, who has been in contact with the University of Pennsylvania athlete, said that Dols is eagerly awaiting his chance to prove himself on the big stage.

“He is very excited. I think the IM will be a challenging one for him, but the good thing is that he definitely has the times to be there, and he will come out to prove a point. He is pumped up and pleased to represent Jamaica at this high level,” said Lyn.