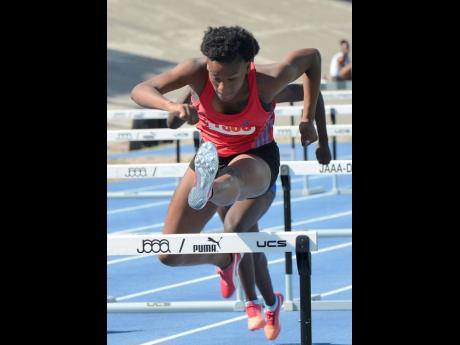 Jamaica’s Britany Anderson was in scintillating form at the Motonet Joensuu Grand Prix in Finland yesterday, as she ran a blistering personal best 12.71 in the 100m hurdles.

Once the time is ratified, Anderson’s run will be a new national junior record, surpassing the effort of Rushelle Burton, who set a junior record of 12.87 back in July of 2016.

The former Vere Technical and Camperdown High school athlete also would have erased the World Under-20 record of 12.74 set by Dior Hall at the NCAA Championships in Eugene, Oregon, back in June 2015.

Anderson beat out pre-race favourite Annimari Korte of Finland, who claimed a new Finnish record of 12.72 for second place.

The feat has been hailed as a phenomenal achievement by the young sprinting prodigy since Anderson recently started her training and competition in Europe.

The 18-year-old clocked 13.01 seconds at the 2018 IAAF World U20 championships in Tampere, Finland, but was controversially handed the silver medal despite having the same time as the USA’s Tori Jones.

At 16 years old, Anderson ran an impressive 12.72 seconds to win the girls’ 100m hurdles gold for Jamaica at the 2017 IAAF World U-18 Championships in Nairobi, Kenya.