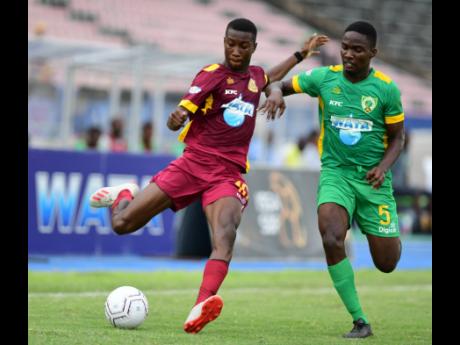 Rushan Parkinson of Dinthill (left) lines up to take a shot, while under pressure from Excelsior’s Junior Parker in the ISSA Champions Cup fixture held at the National Stadium on Friday.

We are well and truly into the business end of the 2019 Inter-Secondary Schools Sports Association (ISSA) schoolboy football season. For more reasons than one, this season so far must go down as one of, if not, the strangest we have seen in many years.

There were, first of all, some unusual early-season disturbances and delays owing to that bizarre lightning blitz that injured some players in the preliminary-round Manning Cup game between Jamaica College and Wolmer’s. That unfortunate incident seemed to somehow spark a plethora of lightning-related disturbances during the initial weeks of the season.

There were several postponed and rescheduled fixtures, with ISSA going as far as to play games at 11 a.m. and 1 p.m. At one point, the discourse shifted towards the possible abandonment of the entire season.

The Manning Cup, especially, lagged behind schedule as a result of the discrepancies. With the lightning threat dissipating, the season is now back in full swing, with lifting the Manning, daCosta, Walker, Ben Francis, and ISSA Champions cups, as well as the Olivier Shield, being the focus of the teams.

The uniqueness of the season extends to the competitiveness of both the Manning Cup and daCosta Cup competitions. To date, there appear to be no clear-cut favourites for any of the seven major titles up for grabs. Any one of Jamaica College, St George’s College, or St Andrew Technical from the Manning Cup or Clarendon College or Cornwall College from the daCosta Cup could conceivably lift the Olivier Shield at the end of the season.

After the first round of the Champions Cup, it could perhaps be argued that based on their overall display and the manner of their victories in the first games, Clarendon College and Jamaica College are front-runners, but the way this season has evolved, it would not be surprising if either or both of these teams get eliminated in the very next round.

It is not even a matter of the football being played generally being inferior or, indeed, superior to that displayed in previous seasons, and neither is this phenomenon necessarily bad for the schoolboy football product. on the contrary, the levelling of the playing field, even if limited and temporary, means more good than bad for all concerned.

The way this season has evolved begs for a comparison to what has emerged in high-school athletics in recent years, where a wider cross section of schools have implemented programmes and engaged qualified technical expertise in the form of coaches and other vital support staff and systems to boost their programmes. The positive impact on athletics and the spread in terms of the emergence of talent are there for all to see.

This kind of parity is indeed ideal for what remains amateur schoolboy competitions, with the advent of more efficient and organised units executing as functional teams without the perennial dependence on individual star players. Of course, this is football, and nothing is fully predictable or guaranteed. The season is just about at the half-way mark, with still enough time for teams to peak and proceed to separate themselves from the field by showing complete dominance and superiority. Compared to previous seasons, such indicators have not been evident, and it seems more likely that nail biting and unpredictable spectacles will feature for the rest of the season

One thing that is all but guaranteed is excitement as the season rolls on without any star-studded, red-hot title favourites as players, coaches, school communities, supporters and the general football-loving public wait with bated breath for the grand climax of what has so far been a strange 2019 schoolboy football season.

Oral Tracey is a sports broadcaster and media personality.