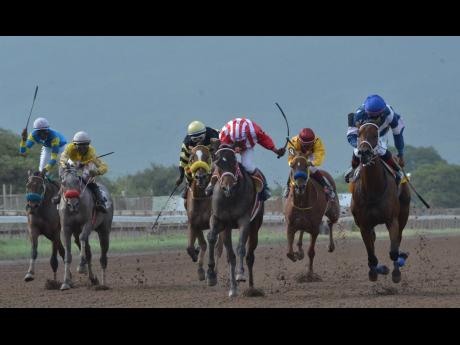 Kenyon Hemans
CRYPTOCURRENCY (centre), ridden by Ian Spence on his way to victory in the Titania Trophy over 1100m at Caymanas Park in St Catherine on Saturday, July 6, 2019.

BACKERS of CRYPTOCURRENCY might have been wondering what the hell Oneil Mullings was doing aboard the four-year-old filly on November 8, as still as a statue, entering the lane in splits of 23.0 and a half-mile in 45.4, only asking his mount to run inside the last half-furlong, before being nailed at the wire by PRINCESS AVA.

CRYPTOCURRENCY literally coasted into the lane, going six and a half furlongs, losing by a neck to fast-finishing PRINCESS AVA in a stakes-record equalling 1:18.3, a run which bettered, by a fifth of a second, PRINCE CHARLES’ victory a half-hour earlier in division one of the Supreme Ventures Diamond Sprint Trophy.

Returning three pounds heavier at 122 in this afternoon’s Ron Ron Trophy at six furlongs, CRYPTOCURRENCY faces a familiar cast with TOP SHELF, ROY ROGERS, MY SWITCHAROO and KING TAVARI renewing rivalry against Philip Feanny’s filly, who has a penchant to haul up whenever alone on the lead.

CRYPTOCURRENCY simply doesn’t like to run unaccompanied, hauling up at exercise 20 days before the race, even after running the first four furlongs in 46.4. Therefore, Mullings, who had won aboard her on September 7, forced to come from off the pace, now found himself in front and, knowing her tendency, decided not to have her go too far from the chasing pack, literally toying on the lead, a six-furlong split of 1:11.1.

However, 4-5 favourite PRINCESS AVA, who was second in the Oaks and placed in two classics – fourth in the derby and a narrow third-place loss in the St Leger – had enough class to spring from the pack, under a robust ride from Dane Nelson, to nab CRYPTOCURRENCY stealing home under Mullings.

The third-place horse, a good three lengths away, was TRICKY ONE, another classic-placed runner – third in the Governor’s Cup and derby – franking the stakes-record performance of her stablemate, PRINCESS AVA, and underlining CRYPTOCURRENCY’s big effort.

Before her November 8 run, CRYPTOCURRENCY had finished sixth behind upsetter ROY ROGERS at six furlongs, beaten by four lengths in a sharp 1:12.4. However, CRYPTOCURRENCY was not the best away and, when trying to find a slot behind runners approaching the half-mile, was squeezed for space between TOP SHELF and MY SWITCHAROO, eventually running wide into the lane, flattening out with 123lb.

ROY ROGERS himself had some traffic problems in the race won by PRINCESS AVA, which he returned to correct with a blistering effort at nine furlongs and 25 yards, running EARN YOUR STRIPES into the ground but could not hold off CRIMSON at the death.

CRYPTOCURRENCY, though, does seem to have the grey gelding’s ticket in every race in which they have met, bar September 28 when ROY ROGERS was extremely lucky not to have had his number taken down for an infringement involving ROJORN DI PILOT a half-mile out.

Elsewhere on the card, for what it is worth, Diamond Mile third-place TOONA CILIATA, similar to SHE’S A MANEATER and STRANGER DANGER in grade one last Saturday, gets a walkover against stablemates in the seven-furlong Gladiator Trophy.