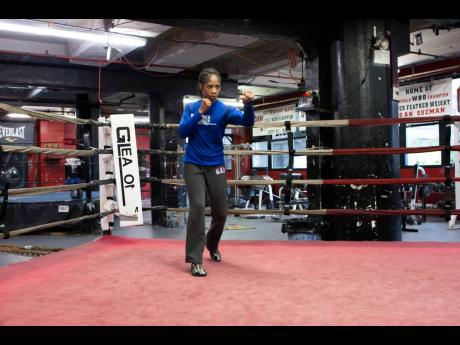 What was supposed to be a three-week holiday from her job in Shanghai, China, as a boxing coach has turned into a nightmare for former five-time world boxing champion Alicia ‘Slick’ Ashley, who is now under a self-imposed quarantine in Fort Lauderdale, Florida.

“I am stuck in the USA and cannot return to my job in Shanghai at this time because of the virus,” Ashley told The Gleaner yesterday. “I am making the best of it, however, as I am with family, and that makes it bearable.”

The Jamaica-born Ashley, whose home base is Brooklyn, New York, has been in Shanghai since August 2018 working as a boxing coach at Zou No. 1 Boxing and Fitness Club. She trains young male and female boxers, a job that she says she “enjoys thoroughly because I am grooming young boxers who I am sure will make their mark in the sport worldwide in the future”.

She said that she was due three weeks’ vacation leave and decided to go back to Brooklyn for that period of time to relax and renew acquaintances with her boxing colleagues there.

“I left China on January 24, the start of the Chinese New Year, expecting to return in February,” Ashley said. “After a week in New York, I went to Florida for what was supposed to be a week, visiting my mother, but then, there was a serious outbreak of COVID-19 in New York, and I could not go back there. At this time, I cannot go back to either New York or China, so I am here in Florida under a self-imposed quarantine and may be here until the summer.

“Fortunately, the weather in Florida is very good at this time, so I am enjoying that and taking the necessary precautions.”

Ashley acknowledged that it was a tough time for all athletes and said that it was a great pity that the Olympic Games had to be postponed. She said that the postponement for a year was a good idea because if the Games had been rescheduled for later in the year, athletes would not have been able to give of their best because of the uncertainty that would still have prevailed.

She was awarded the Guinness World Record for being the oldest female world boxing champion, a title she was awarded when on October 29, 2015, at age 48 years and 67 days, she defeated Christina McMahon to win the World Boxing Council female super bantamweight title.