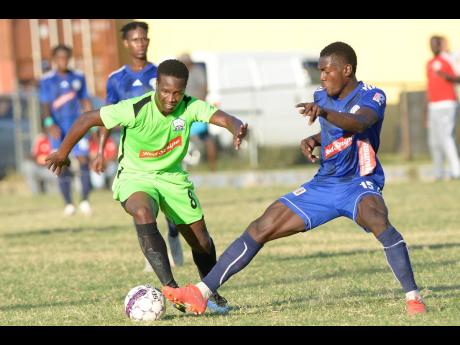 File
Mount Pleasant’s Kevaughn Isaacs (right) gets a toe to the ball ahead of Molynes’ Tyrique Wilson during a Red Stripe Premier League match at the Constant Spring Sports Complex last December. 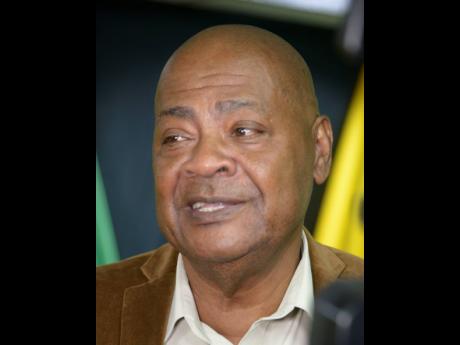 President of the Jamaica Football Federation (JFF) Michael Ricketts yesterday cancelled the 2019-2020 foot­ball season and declared all competitions null and void. Ricketts made the announcements via a Zoom media conference yesterday morning.

“The 2019-2020 football season will be cancelled. This is for all levels of competition, nationally and parishes; the Premier League, Super Leagues, and Major Leagues,” he said.

He said that the season would also be declared null and void. As a result, no champions will be declared for any competition, and no team will be relegated, Hence no team will be promoted. So all teams will retain their ranking as of September 2019 and will be eligible to participate in the 2020-2021 season. The 2020-2021 season has been tentatively set to start in September, and consideration will be given for the adjustment of the registration periods, including transfer windows.

Ricketts said that the health and wellness of all its stakeholders is priority and that the committee considered five things before coming to the decision, including the debilitating effect of the pandemic on the country; the Government’s decision to cancel physical school gatherings until September 2020; Concacaf’s decision to postpone or cancel all its competitions up to July 2020, the World Health Organisation’s forecast of the pandemic, which says that we are far from getting out of the woods, as well as what the board thought was the impractical implementation of the medical protocol necessary to safeguard the health of all.

“The Government of Jamaica would have to cater to all the testing needs of all the football community. The JFF deemed the aforementioned protocol regarding testing as being extremely impractical and improbable,” he said. Ricketts also said it was unclear at this time as to what effect a positive test would have on each competition.

He apologised to football stakeholders for the delay in the decision but said that after high-level consultations, they thought cancellation of the season was the correct decision.

“We would have had a number of consultative discussions with key stakeholders because I wanted to make sure what we were doing was indeed correct. I would have had discussions with the minister with responsibility for sport, Ms Olivia Grange, with medical doctors, and Dr Akshai Mansingh was totally opposed to a restart. As a matter of fact, he was forthright in saying that UWI FC would not be able to participate,” he added. He also said it was likely that in addition to UWI FC, some of the other Premier League clubs would not have been able to participate if there was a restart to the competition.