Hemmings-McCatty looks back at Atlanta glory 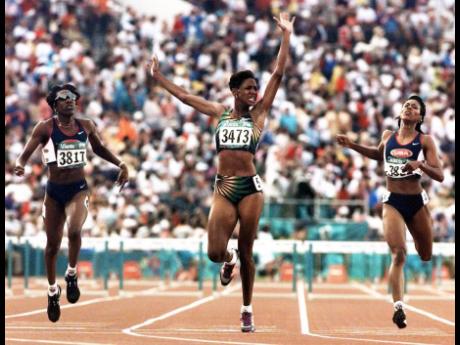 File
Deon Hemmings-McCatty (centre) celebrates after winning the 400m hurdles at the Atlanta Olympics in 1996.

Deon Hemmings-McCatty made sporting history on July 31, 1996, 24 years ago today. On that day in Atlanta, she became the first Jamaican woman to win an Olympic gold medal with a memorable triumph in the 400m hurdles.

“Wow, it’s amazing,” Hemmings-McCatty said of a campaign that saw her setting Olympic and Jamaican records of 52.99 seconds in the semi-final and 52.82 seconds in the final. “It’s because of lots of hard work, dedication, and determination because I knew I wanted to do well, and I’m the type of person who always wants the best, to be the best, so I worked very hard.”

A year earlier, at the World Championships in Gothenburg, Sweden, Americans Kim Batten and Tonja Buford smashed the world record with sensational times of 52.61 and 52.62 seconds, respectively. Hemmings-McCatty lowered her own Jamaican record to 53.48 seconds to take the bronze, her first major medal.

“Tonja and Kim and I, we ran throughout college, so I expected that if one or two of them run a time, I’m expected to run that time also, so in 1995 in Gothenburg, when both of them broke the world record, getting the bronze was my first medal, international medal, major medal. You’d believe that I’d be very excited,” Hemmings-McCatty recalled.

Instead, she was crushed. “I was literally crying because I could not understand why they had run so fast and me so slow,” she recounted painfully.

The disappointment drove her into the Olympic year. With her US coach, Bev Kearney, directing her through the third year of a programme designed to push the Jamaican on top, Hemmings-McCatty got ready to meet Batten and Buford again.

“I think it was in April, my training just took a turn for the best,” she said. “I was running so well that coach had to tell me to slow down sometimes.”

A big run in the Olympic semi-final told her that she was in peak form.

“That race was sweeter than the gold because at least I ran sub-53 [seconds], so I knew that I was on the right track,” she said.

She went out fast in the final, but Batten and Buford came forward with 100m to go.

“I don’t know who was behind me or who was in front of me, but I ran my race, and when I came off that 10th hurdle, I’m like, ‘Catch me if you can’, and I ran straight through that finish line,” she said.

Then she learnt she was the first Jamaican woman to win Olympic gold.

Four years later, after taking silver and bronze at the 1997 and 1999 Worlds, she readied herself for a defence on her Olympic title.

The injury restricted movement in her lead leg, and she had to be content with the silver medal in a race won by former sprinter Irina Privalova of Russia. It also forced her to face the prospect of retirement.

She took her cue from the 1996 injury troubles endured by Sally Gunnell and Sandra Farmer-Patrick, the gold- and silver-medal winners at the 1992 Olympics and the 1993 World Championships. Accordingly, she had already begun to read for the qualifications for her post-track career in real estate.

Hemmings-McCatty is the only woman in Olympic history to win two medals in the 400m hurdles. However, she backs Dahlia Muhammad, who holds the world record, the World title, and the Olympic title, to join her in this elite category next year at the Tokyo Olympics.

The ‘secret’ to her success is hard work.

“When I put my mind to something, I always work extremely hard at it,” she said.

That mantra has made her the most successful female 400m hurdler in Olympic history.