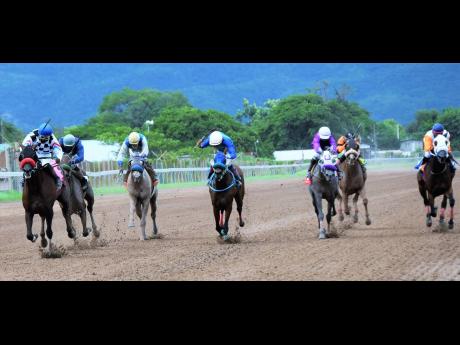 ANTHONY Thomas Sundays’ continued at Caymanas Park at the weekend as the leading rider reeled off another five-timer, bettering his act by closing the eight-race card with four consecutive winners.

Thomas’ four-day blitz could very well be the most awesome run ever in local-racing history, 15 winners in four days, including two five-timers, not to mention a hat-trick and four consecutive winners on different afternoons.

Dane Nelson, the 2012-14 champion jockey, who led Thomas by one winner up to two weekends aback, has been reduced to a mere spectator, left lagging 13 wins behind after breaking a four-day drought aboard LADY RATTAPUR in the fourth race.

Thomas, who had opened the card aboard 7-5 second choice MR UNIVERSE, beating Nelson astride LORD ASHTON, responded to his rival’s lone win in rapid-fire action - OCEAN WAVE, A SEH SOUP, MY EPISODE, and SIR ALTON - bringing down the curtains on another marauding day for the 2018 champion rider.

Racing continues at Caymanas Park this weekend with back-to-back meetings.