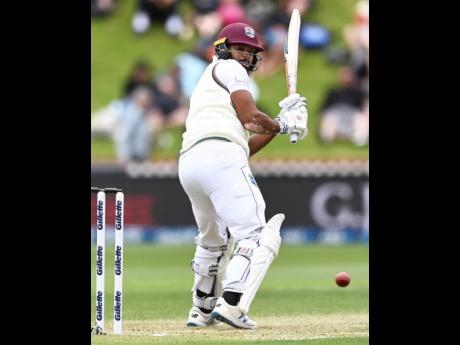 West Indies opener John Campbell finally found some form on the tour of New Zealand, as his half-century along with an unbeaten 60 from skipper Jason Holder have given the visiting side a bit of respite, following the third day's play in the second Test in Wellington.

At stumps, the West Indies following on, were 244 for 6, with debutant wicket-keeper Joshua Da Silva still there with his captain on a resolute 25.

Earlier, Campbell scored a Test-best 68 from 109 balls, as the West Indies still trail the Kiwis by 85 runs heading into today's fourth day.

It was a day where the New Zealanders claimed eight wickets, as Tim Southee quickly wrapped up the West Indies' first innings in the morning session, by claiming the last two wickets of Da Silva and Shannon Gabriel, to dismiss the visitors for 131, replying to 460.

Still facing a huge deficit, the West Indies, asked to follow on, got a decent start from openers Campbell and Kraigg Brathwaite. The pair went about their second innings more positively putting on 37 runs before Brathwaite fell for 24.

Campbell, who has been under tremendous pressure in the run-scoring department, finally buckled down and played a more patient defiant knock, reaching his 50 off 81 balls with six fours.

He and Shamarh Brooks put on 89 runs for the third wicket before Brooks went caught behind off Neil Wagner for 36 at 130 for three. Roston Chase' miserable Test match continued as he made a pair, while first innings stand-out Jermaine Blackwood could only get to 20 this time around before he was bowled by Trent Boult.

Captain Holder and wicket-keeper Da Silva then hunkered down and saw the West Indies to the close, following an unbroken 74 run seventh-wicket partnership.

Holder has so far hit eight fours and two sixes in his 60 not out, as Trent Boult has so far taken three for 75 and Kyle Jamieson two for 43.

Campbell, who was getting his second Test half-century, said the conditions were very tough for batting against the disciplined New Zealand attack.

"It's pretty difficult, it's probably one of the best bowling attacks in the world right now in Test cricket in their home conditions. At the start of the day, they put us under tremendous pressure and it was good that Brooks and I were able to put on a partnership and keep them at bay for a little while," said Campbell.