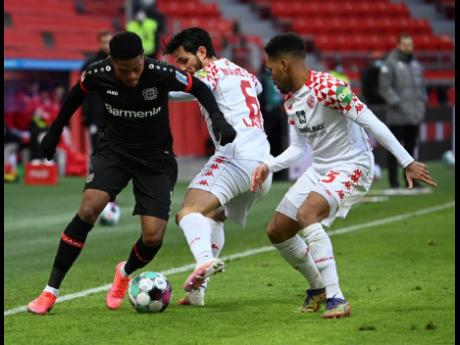 Leverkusen's Leon Bailey (left) vies for the ball with Mainz's Danny Latza and Philipp Mwene, during the German Bundesliga match between Bayer Leverkusen and FSV Mainz 05, at the BayArena, in Leverkusen, Germany, Saturday, February 13, 2021.

Jamaica and Bayern Leverkusen attacking player Leon Bailey is urging the authorities to continue the fight and stamp out racism, this after the winger received racist messages via social media.

Bailey shared a screenshot message he had received on Instagram, which came from a handle zorzi_84 under the name Zoran Ristic. The message, which also included foul language writes “F*#k you incompetent mother. You can’t score a goal you stupid monkey. To you and your incompetent teammates, f*@k all the loved ones you have alive or dead, damn stinky s*@t.”

Bailey swiftly denounced the heinous act by replying to the message, stating, “These are messages we footballers gets almost every day. It’s not okay!!! Say no to racism!!!

Just one day ago, Swansea City footballer Yan Dhanda, who is one of Britain's highest-profile South Asian footballers, was racially targeted on social media after Swansea’s midweek 3-1 FA Cup defeat to Manchester City.

Last week, Manchester United female-forward Lauren James called on Instagram to "do something" after she became the latest footballer to receive racist abuse online.