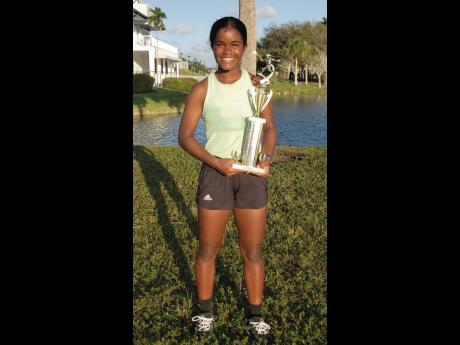 A series of impressive performances in recent tournaments and an improved ranking have earned young Jamaican tennis star Alyssa James an invitation to participate in the Adidas-sponsored Easter Bowl Junior Tennis Tournament, which takes place in San Diego, California, USA, from March 24 to April 4.

Referred to as the Super Bowl of junior tennis in the USA, the tournament attracts some of the best players each year, and most of today’s top male and female tennis stars in the USA have played in this tournament on their way to the top.

James, who started playing tennis at age three, is now 13 years old and attended Hillel Academy, where she was a standout. She has always done well on the local scene and represented Jamaica overseas on many occasions. At age 10, she was the top-ranked player in the 14 and under age group in Jamaica, and won the Florida leg of the famous Little Mo Internationals in 2016 and 2017.

She is now based in Florida and is being coached by Lina Krasnorutskaya, who was a very talented and top-25 ranked WTA player, before being sidelined by injury.

James has had some impressive performances this year in United States Tennis Association (USTA) tournaments.

She has been moving up rapidly in the rankings this year, and has jumped from number 675 in the USTA national 14 and under rankings to number 188, and is currently ranked at No. 22 in Florida.