West Indies press on in the rain-affected third day 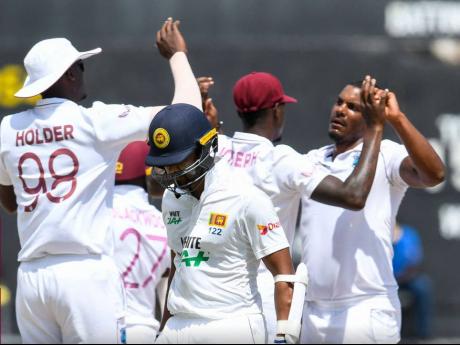 CWI Media
West Indies fast bowler Shannon Gabriel ( right) celebrates with teammates after picking up the wicket of Dinesh Chandimal (foreground) on the third day of the second Test against Sri Lanka at the Sir Vivian Richards Stadium in Antigua and Barbuda.

Despite the inclement weather putting a halt to their progress, the West Indies bowlers continued to show marked improvements, and their discipline bore fruit on the third day of the second Test against Sri Lanka, who head into today’s penultimate day on 250 for eight, still trailing the hosts by 104 runs, with just two wickets standing.

When the rain ended play on the third day, rookie batsman Pathum Nissanka was one run short of what would be a well-deserved half-century. With him is Lasith Embuldeniya, who is yet to score.

It was another attritional day for the West Indies bowlers, who applied pressure to the Sri Lankan batsmen, who resumed the third day on 136 for three, with Dinesh Chandimal on 34 and Dhananjaya de Silva on 23.

The pair would eventually go on to put on a valuable 75-run fourth-wicket partnership, however, it was fast bowler Shannon Gabriel, who got things going in the morning session, with some hostile and sharp bowling.

That hostility was used to set up Chandimal, who added 10 runs to his overnight score before he was caught hooking to hand Gabriel his first wicket of the series at 152 for four.

The first rain interruption may have disrupted the concentration of de Silva as he fell on the resumption to an unlikely source in Jermaine Blackwood, who trapped the right-hander in front for 39, to leave the visitors in a spot of bother at 177 for five.

As they did in the first Test match, Nissanka and wicket-keeper Niroshan Dickwella resisted the Windies onslaught and took the score past the 200 mark after lunch.

It was the second new ball that would bring more success for the hosts as Jason Holder was introduced, and he had Dickwella caught behind for 20 after a review.

When Alzarri Joseph sent back Suranga Lakmal for six, and Holder found the edge of Dushmantha Chameera for two, at 231 for eight, the home side harboured thoughts of wrapping up the innings quickly.

Nissanka, however, had other ideas, and he shielded Embuldeniya while adding 19 crucial runs in his unbeaten 49 before the rain came once again to end play at 250 for eight.

Holder has so far bagged two for 39, and Joseph has picked up two wickets for 64 runs.