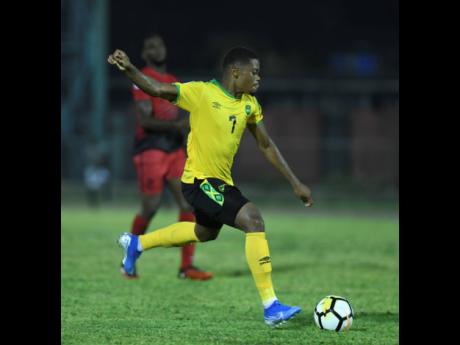 The Leon Bailey Dare to Care Foundation presented 25 tablets to The Nest Salvation Army Children's Home in St Andrew last week. This was part of the foundation's Easter Care and Share initiative.

It was the first activity for the new foundation, which was formed last month, and Chairman Craig Butler said helping needy children is the main focus. He said starting with a children's home close to where Reggae Boy Bailey grew up was significant.

"It's only a small token, but it is most important to let them know that people care and that if they believe they can be all that they can be, people will be here to support them along the way. So this is Leon's and Phoenix [All Stars Football Academy's] way of saying we care."

Bailey is an ambassador for Food For the Poor (FFP), which selected the Nest as part of its Angel of Hope programme.

"The Angel of Hope programme covers 24 children's homes across the island, of which The Nest is one of them," FFP Director of Projects and Social Intervention Susan Moore said. "The Nest is important to Food for the Poor because of the care that it provides for our children. It is about providing the best help for those in greatest need and that is what The Nest represents."

FFP Director of Operations, Craig Moss-Solomon, said that the devices will assist the youngsters in continuing their education during the pandemic.

"This is recognising the importance of education and recognising that these children, wards of the state, if they did not receive these tablets, we did not know who was going to give it to them," he said.

"So we are so thankful that they were able to bring it to them and that their education will continue in this time of COVID."

Over 50 children with disabilities at the Bethlehem Children's Home were also given a happier Easter with donations of bun and cheese from Phoenix on Thursday.

The buns were sponsored by the Kiwanis Club of Friends Across Borders, Florida Chapter, and the cheese by Phoenix