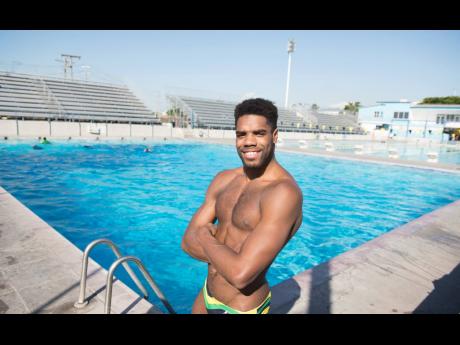 Diver Yona Knight-Wisdom says he can once again train with purpose after it was announced that the cancellation of the Olympic Games qualifier, the FINA Diving World Cup, was overturned.

The Diving World Cup was due to take place in Tokyo, Japan, from April 18-23, but the event was cancelled last week by the world’s governing body, FINA, because of coronavirus fears in the host country.

There were also plans to set a new date and location for the Olympics qualifying event, but the federation had a change of heart over the weekend and decided to stage the event in Tokyo, with new dates, May 1-6, much to the delight of the Jamaican Olympian.

“Yes, I feel better, as that is what has been keeping me going. The cancellation was not necessarily a setback, but it was the uncertainty of not knowing what I was training for and not knowing what the rest of the year would hold,” Knight-Wisdom told The Gleaner.

“My training stayed at a reasonable level, as I was still pushing myself and still was diving reasonably well over the last week,” he added. “But the longer that had gone on, it would have affected me, especially after a year of training with no real purpose.”

Knight-Wisdom was aiming to reach the 410 points required to secure his Olympic berth, and the World Cup was the only qualifying event left for him to do that before the Games, which get underway on July 23 and run until August 8.

With the progress he has made during the pandemic, he said it would have been tough if he did not get this opportunity to try and qualify.

“The intention of postponing the World Cup would have been in a good place but I think the uncertainty would have made it a little more difficult for me. The main thing is that I wouldn’t have the opportunity to qualify. I would have to depend on how they go about selecting qualifiers for the Games,” he said.

The Jamaican diving star added that if Japan had failed to host the World Cup event, it would have left a huge question mark over their ability to host the Games.

“It (cancellation) threw doubts about the Games itself because I thought that if they could not run a World Cup how are they going to run an Olympics Games.

“Now that the World Cup is back on, it gives me the confidence that it (Olympics) will go ahead, even though I always stood firm that the Games would go ahead this year,” he commented.

Aquatic Association of Jamaica (ASAJ) president, Martin Lyn, is also pleased the young diver will get an opportunity to see what his competition looks like before the actual event.

“He needs that type of exposure. We didn’t want Yona going into the Olympics without some sort of recognition of what his competition will be like. In any sport you don’t want to go in any major event not knowing how your competition has performed, you always want to see the ability that you are up against and this will give him an opportunity to see what other divers from around the world are doing, so he can know how to plan,” said Lyn.