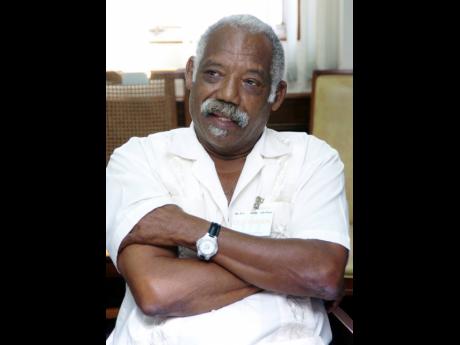 Jamaican Olympian Dennis Johnson, 81, has been admitted to hospital after contracting the deadly coronavirus disease, leaving family and friends hoping for the best for the man considered universally to be an architect of Jamaica’s reputation as a sprinting powerhouse.

Johnson, who equalled the world record of 9.30 seconds over 100 metres in 1961, has been admitted to the University Hospital of the West Indies, after testing positive for COVID-19.

Johnson’s diagnosis came about after the sprint legend went to the hospital after suffering a bad fall after slipping and hitting his head in a store bathroom while out shopping.

The former director of sports at the University of Technology went in to get stitches for the gash; however, upon receiving a CT scan and other tests, it was revealed that Johnson had contracted COVID-19, which had developed into a slight bout of pneumonia.

The former Pan Am Games relay bronze medallist has been in hospital for the past two weeks and his son Peter Johnson says the situation currently is a watch-and-wait scenario for the man known affectionately as ‘DJ’.

“His immune system is weak and he is battling a respiratory disease. He has had a history of smoking so his lungs are not as strong. They say it’s just a little bit of pneumonia in his lungs and he is constantly on antibiotics. We just have to hope for the best and hope he gets strong enough to come home,” said the younger Johnson.

Johnson, who was conferred with the Order of Distinction by the Jamaica Government in 2001, has been receiving the maximum amount of oxygen required.

With the elder Johnson also having chronic inflammatory lung disease, son Peter is hoping that his father’s condition will improve significantly.

“It’s in the doctors’ and God’s hands right now. We are praying on the outside, and even though he seems strong, he believes if he stays in the hospital too long he is going to go, and he would rather be at his home if it was to get worse. We are not praying for that and we just want him to come home,” added Peter.

After leaving San Jose State University, Johnson went into sports administration and coaching and is considered an architect of Jamaica’s success in the sprints.

Johnson has served at UTech in many capacities, including as chairman of the Sports Advisory Council; adjunct associate professor of sport science; the first director of sports; and has headed special projects for intercollegiate sports.

Johnson competed at the 1964 Olympics in Tokyo as a member of Jamaica’s fourth-place finishing 4x100m relay team.