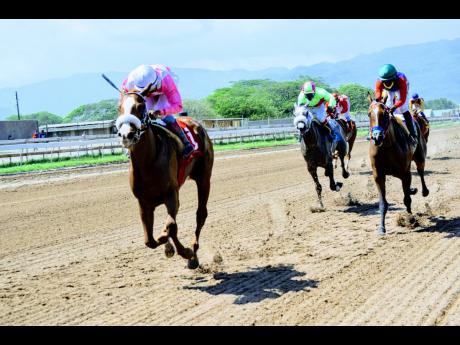 Anthony Minott
MINIATURE MAN (left) ridden by Anthony Thomas is a 27-1 long shot winner ahead of the favourite AWESOME LIZ (Omar Walker) in the ninth race over a Mile at Caymanas Park on Saturday, April 17, 2021.

WAYNE might not be around but the DaCosta-Nunes war rages on through his son Jason, whose 9-1 shot, MINIATURE MAN, forced a dead-heat with 4-5 favourite FURTHER AND BEYOND in yesterday's Kingston, a thrilling finish at seven and a half furlongs ahead of next month's 2000 Guineas.

A weight test for last year's champion two-year-old, FURTHER AND BEYOND, who again allowed weight all around, after battling to a short-head victory over BILLY WHIZZ at seven furlongs in the April 6 Prince Consort Stakes, the Kingston gave a clear indicator of Nunes' runner's class, as he held on grimly for the photo with MINIATURE MAN.

Running nine pounds lighter than topweight FURTHER AND BEYOND, who was slowly into stride but barreled through rivals to lead past REGNANT three furlongs out, MINIATURE MAN improved into third early in the straight and took aim inside the last half-furlong.

Spotting his danger looming large in mid-track, Dane Nelson angled FURTHER AND BEYOND away from the rail to meet MINIATURE MAN, gaining willingly and pulling alongside with Dick Cardenas shades from the wire.

MINIATURE MAN appeared to have won the last bob at the post but FURTHER AND BEYOND pulled off another getaway act, sharing the spoils this time around in a dead-heat, both clocking 1:34.1.

Gary Griffiths' REGAL AND ROYAL ran the race of his life, moving in tandem with FURTHER AND BEYOND to attack REGNANT, straightening second at long odds, 99-1, and stayed on for third, after being relegated by MINIATURE MAN a half-furlong out.

Anthony Thomas inched two winners clear of Nelson atop the jockeys' standings with a two-timer, SIR JOHN and MISS HILLINGTON, in the fourth and eighth races, respectively.

DaCosta, who teamed up with Thomas to score with SIR JOHN, shared the day's honours with Michael Marlowe, saddling two winners apiece.

Marlowe opened the 10-race card with NALA'S BUSHMAN and returned to land the third with 5-1 mild upsetter, CASUAL PEACH, partnered by Cardenas, who completed a two-timer astride RUM WITH ME in the seventh.

Racing continues on Saturday whereas the planned Sunday meet has been rescheduled for Monday, May 17.