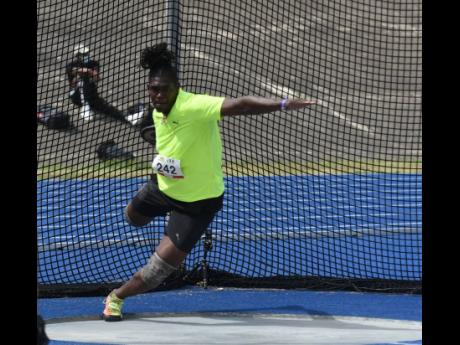 Kenyon Hemans
Fedrick Dacres on his way to victory in the men’s discus throw event at the Olympic Destiny Series at the National Stadium yesterday.

World Championships discus runner-up Fedrick Dacres was almost apologetic about his winning throw of 62.73m at the second leg of the new Jamaica Olympic Association/Jamaica Athletics Administrative Association’s Olympic Destiny Series at the...

With curfew requirements obliging meet organisers to start the event at 8 a.m., Dacres, the national record holder, reckoned his body was not operating at full power when he entered the circle. By comparison, he produced six throws over 65m last week in Tucson, Arizona.

“Today was a good day in terms of the conditions and all that, but unfortunately my body was a bit low because of the early meet thing,” Dacres said after his win. “I’m a morning person, but not this early morning person.”

By contrast, his stint in Tucson, Arizona included a winning effort of 65.93m on May 20 at the Tucson Elite Classic. The comparison led Dacres to say, “Today was not really a true reflection of what I’m doing in training. In terms of training, I’m doing way better, but this is competition, this is where it counts. In terms of competition fitness, I’m not really there. This is my third time competing for the season, so I’m trying to work out the kinks and trying to shake off the rust and get ready for the big Olympics.”

In Tucson, Dacres, the Pan-American and Commonwealth Games gold medallist improved his season’s best from 62.09m to 65.78m on his first throw at the Elite Classic, and added marks of 65.82m and 65.61m before hitting 65.93m on his last throw. Though he lost to Alex Rose of Samoa two days later at the USA Track and Field (USATF) Throws Festival, Dacres produced marks of 65.20m and 65.00m, and three fouls.

Those results confirmed that he was recovering from surgery for a torn ligament in his left hand.

Dacres’ coach Julian Robinson said, “We’re in a race against time and I think he is using the time efficiently.’’

Robinson is eyeing meets in the United States to allow Dacres to get international competition.

“Typically, we would go to Europe, but we cannot go to Europe for various reasons,” he said. “One, COVID is ravaging Europe. Two, when he goes to Europe, he is away for too long and we cannot afford for him to be away for too long. So, in the meantime, we’re going to try and get as many competitions in America as possible and then have him fly back to Jamaica and continue the work.”

Traves Smikle, the Pan-American and Commonwealth Games runner-up, was second yesterday with a best mark of 62.10m, with 2018 World Under 20 Champion Kai Chang third with a distance of 59.92m. Chang was also in Tucson and placed sixth and 10th at the Elite Classic and the USATF meets, with marks of 61.11m and 58.71m, respectively.