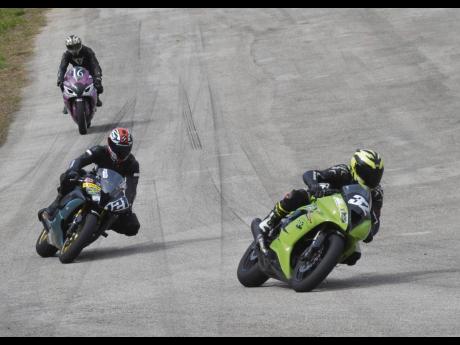 File
Riders compete at Dover Raceway during the Independence of Speed event in 2018.

With competitive action likely to return to Dover Raceway on Independence Day, August 6, Doug Gore, marketing director of the Jamaica Race Drivers Club (JRDC), said his association is now actively seeking sponsorship for the repavement of a section of the track, which has been blamed for a number of accidents in the past.

In fact, in 2019, motorcyclist Norman Chung died from injuries he sustained after he was involved in an accident on one of the problematic corners, which is now badly in need of repairs.

Another motorcyclist, Lance Douglas, also succumbed to injuries from an accident at the venue in 2012.

Gore told The Sunday Gleaner that his association is desperately seeking the more than $5 million it will take to resurface sections of the track in time for the reopening of the St Ann-based facility.

“I would say that there are four corners and a straight that need intervention right away, and that would probably (cost) in the region of about five million dollars,” said Gore.

“I think if we can find a sponsor that can take up something like that, then I can tell you that brand, or whatever they decide to promote, will be placed all over the racetrack just like Miracle Corporation, who sponsored us two million dollars, is going to be all over the racetrack,” he added. “We will definitely make sure that they get their money’s worth as far as advertising is concerned at Dover Raceway.”

He pointed out that his organisation is very big on the safety of their drivers and motorcyclists and, therefore, all the COVID-19 safety guidelines will have to be followed once they are granted approval by the Government for resumption.

“There are many different things that can happen which can cause an accident, but as a club we have to look at the scenarios that are in front of us, which are track preparations and the safety of the track itself for everyone,” Gore said.

There have been no competitive racing at Dover Raceway for more than a year due to the COVID-19 pandemic, and despite this, Gore shared that the JRDC has still managed to maintain the facility with help from a number of sponsors and well-wishers.

“The likes of Sherwin Williams has come on board and they have donated paint to help paint up the place and to make the place look pretty,” he said. “We have people who are going and cutting the grass every Tuesday, and so Dover is looking beautiful right now.”