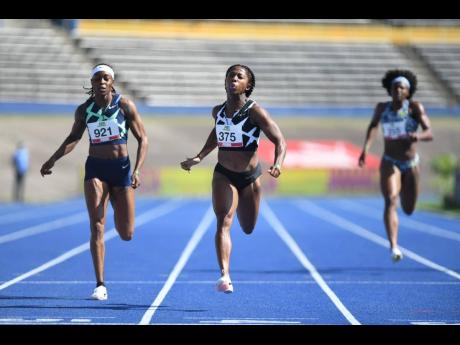 Gladstone Taylor
Shelly-Ann Fraser-Pryce crosses the line ahead of runner-up Shericka Jackson (not pictured), and Elaine Thompson Herah (left) to win the women's 200m final at the National Senior Championships at the National Stadium on Sunday morning.

Shelly-Ann Fraser-Pryce again stamped her class as a world-class sprinter, breaking 22 seconds for the first time on the final day of the National Senior Championships at the National Stadium in St Andrew on Sunday morning.

In a repeat of the women's 100m, it was a battle between the same three athletes in the 200m, but it was the fast-starting Fraser-Pryce who found an extra gear in the latter stage to take the win in a personal best 21.79s. Shericka Jackson was second in a personal best 21.82s, with Elaine Thompson Herah third in 22.02s.

"God is good," Fraser-Pryce said after the race. "It was all about faith and purpose and it was the right time to wait. I am elated to go sub-22s for the first time and massive, massive big up to my coach Reynaldo Walcott."

The day's proceedings started off with two upsets in the men's and women's sprint hurdles.

In the first event, the women's 100m hurdles, Megan Tapper, the sixth-ranked Jamaican, produced a season's best 12.68s, getting the better of two former Under-18 World Champions, Yanique Thompson (12.73s), of SprinTec, and Britany Anderson, third in 12.75s. The 2015 World Champion, Danielle Williams, had to settle for fourth in 12.76s.

Reigning Olympic Champion Omar McLeod will not defend his 110m hurdle title, as after hitting several hurdles, he finished at the back of the field. MVP Track Club's Ronald Levy captured his third national title in a row, winning in 13.10s, just edging out Damion Thomas (13.11s), the 2018 Under-20 World Champion for second, as Hansle Parchment, after a long break, returned to competition to finish third in a season's best 13.16s.

It was personal bests for the three finishers in the women's 400m final, led by MVP's Stephenie Ann McPherson (49.61s). Second was University of The West Indies' Candice McLeod (49.91s), and third went to Puma's Roneisha McGregor (50.02s).