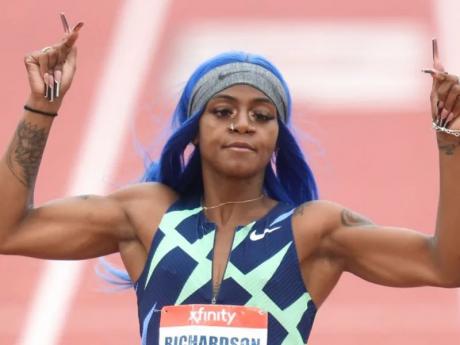 Richardson's win at the US Trials and her strong personality have drawn the admiration of several US celebrities such as former First Lady, Michelle Obama and actress Viola Davis.

American sprinter Sha'Carri Richardson looks set to miss the Olympic Games after her US Olympic Trials performance was disqualified because she tested positive for a prohibited substance.

News of the infringement arrives four weeks before the start of the athletics competition at the July 23 to August 8 showpiece in Tokyo.

Richardson could serve a one to three-month suspension for the adverse analytical finding.

According to sources who asked for anonymity, traces of the substance were found in the 21-year-old's sample from a recent drug test.

The test was carried out at the US Olympic Trials.

Since January 1, 2021, the drug has been classified as a 'Substance of Abuse' by the World Anti-Doping Agency (WADA) and currently carries a maximum four-year ban.

However, if an athlete can prove that the drug was used out of competition and that there was no sports performance benefit, the ban will be reduced to a period of three months with no need to further examine the degree of fault.

WADA also stipulates that the ban can be reduced by a further month if the athlete is willing to undertake an approved treatment programme in collaboration with his/her national anti-doping body.

If the drug is taken in competition but the athlete can prove that the use was unrelated to performance, a two-year ban will be handed out as the infringement will be considered non-intentional.

Richardson was expected to challenge for the 100m gold medal at the Games, after posting 10.72 seconds in April - one of five legal sub-11 seconds clocking from the American this season.

It is understood that fourth-placed finisher in the 100m at the USA Olympic Trials, Jenna Prandini will replace Richardson in the event at the Olympics, while fifth-placed finisher Gabby Thomas has also been entered.

Richardson's win at the US Trials and her strong personality have drawn the admiration of several US celebrities such as former First Lady, Michelle Obama and actress Viola Davis.

The last message on Richardson's official Twitter account posted just after midday late Thursday evening was "I am human."