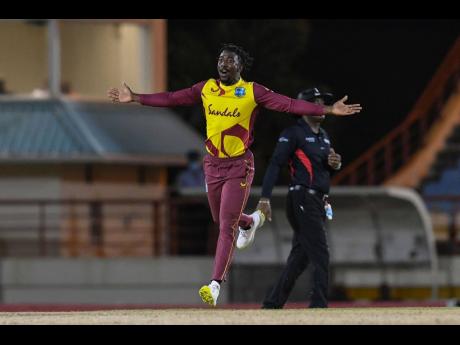 CWI Media
West Indies bowler Hayden Walsh Jr celebrates after taking a wicket against Australia in their first of five Twenty20 International matches. the game was played in St Lucia on Friday.

Hayden Walsh Jr was one of the standout players for the West Indies in their resolute performance which saw them beat Australia by 18 runs in the opening Twenty20 match in St Lucia on Friday.

The leg-spinner bagged three wickets to go along with Obed McCoy’s four wickets to wreck the Aussies’ run chase, which capitulated to just 127, chasing 146 for victory.

The phrase ‘snatching victory from the jaws of defeat’ could not be any more evident in the opening contest, as the West Indies were staring down the barrel with the visitors nicely poised at 108 for five in the 11th over.

But Walsh and McCoy had other ideas, as they bowled with heart and determination which saw the visitors imploding and losing six wickets for 19 runs.

Walsh, who had career-best figures of three wickets for 23 runs in his four overs, says he was happy that he could contribute to the remarkable win to kick start the five-match series.

“I have been preparing for a very long time through all the hardships and being out and wanting to get back in,” he said. “I am really pleased that I came back and used my first opportunity to do well.”

With game two bowling off later today, the St Croix-born player is expecting the Aussies to come back raring to go, but he believes the West Indies will be up for the task when the first ball is bowled.

“The dressing room is very happy and we are really enjoying our cricket,” he said. “I hope we will stick to that and be consistent in playing.”

The West Indies will be mulling over the fitness of captain Kieron Pollard who could come back into the team, however, it is not clear who would make way.

The Australians are likely to field the same team despite the loss, and captain Aaron Finch is confident his troops can rebound and square the series.

“We have to dust ourselves off and come with the same attitude and this time execute better under pressure,” Finch said.