Jamaica go down to Costa Rica 1-0 in Gold Cup 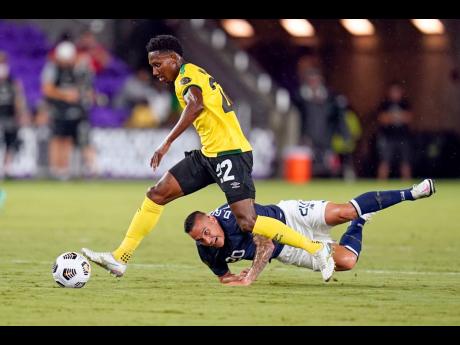 Jamaica's Reggae Boyz went down 1-0 in their final Group C game of the Concacaf Gold Cup in Orlando, Florida on Tuesday night.

Bryan Ruiz secured the winner with a header in the 53rd minute for Costa Rica, who were second best for most of the match. They even played with 10 men for 24 minutes after their goalkeeper Leonel Moreira was sent off for handling the ball outside the box.

The Jamaicans seemingly did everything right except put the ball in the net as they had 19 shots, 11 of which were on target, 56 per cent possession of the ball, more accurate passes and less fouls conceded.

There was also two and a quarter-hour delay to the game in the third minute because of a thunderstorm, which also affected the schedule of Group D. That was because it had Panama and Grenada playing at the same venue, Exploria Stadium, in the night's double header.

The win for Costa Rica means they win Group C and now face Group B runners up Canada in the quarter-final on Sunday at 6 p.m. Jamaica time. The Reggae Boyz, Group C's runners-up, play hosts and Group B winners the United States of America in Arlington, Texas on the same night at 8:30 p.m. Jamaica time.