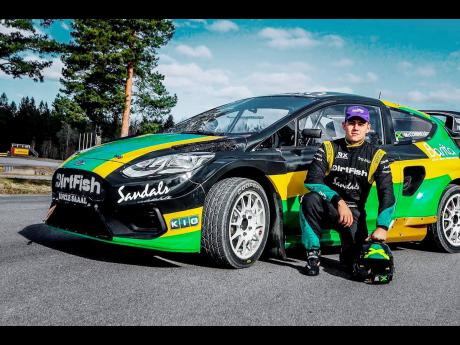 In his electric rally car circuit debut, Jamaica’s RallyCross driver, Fraser McConnell, made a strong impression on day one of the RX2e Championship at the Circuit de Catalunya in Barcelona, Spain, yesterday.

McConnell finished in the top three in the first two qualifying rounds, to put himself in a tie for second place on points with Finnish driver Jesse Kallio. Belgian driver Guillaume De Ridder is the current leader heading into today’s final day of the opening event of the circuit.

McConnell’s team, OlsbergMSE, helped to launch the series which is now part of the World RallyCross Championship.

The Jamaican said that while the initial start was an adjustment, he was satisfied with his opening day performance and highly motivated by the challenge laid down by his competitors.

“I’ve had really good fun today and these guys have really made me step up my game. This is all very new for all of us – we’ve made some gambles with our set-up changes, but we are just going out there and going as fast as we can,” McConnell told RX2e.com.

Despite the initial growing pains, McConnell believes he is getting comfortable with the car and close to finding the right formula to go faster for today’s final day of competition.

“There are so many elements that make this car exciting. The instant acceleration makes it easy to get good. But to get from good to really fast is the tricky bit. Guillaume has figured it out and Jesse and myself are nearly there,” McConnell said.

In the build-up to the inaugural series, McConnell told The Gleaner that with the absence of gears in the car, his driving skills will be even more important to get the extra edge for victory. He is currently in the middle of his RallyXNordic season, which will see him compete in the final rounds of the championship next month. Also, he sees long-term benefits in his evolution as a driver competing in this new series.

“Anytime in a car is valuable. Seating time is priceless. So although it’s a different car to the Nordic series, I’m still developing my racecraft each lap. Keeping my eyes sharp and the fundamentals are the same. Although it’s electric with no gears and it is not as fast, it will still help better me as a driver overall,” the Jamaican said.

For now, his concentration is fixed on giving his best in this series, full of belief that it proves there is another avenue for Jamaican and Caribbean drivers to attack and thrive in.

“For me, it’s just getting the opportunity and showing the world that we can compete in yet another series that no one in the Caribbean has ever done,” McConnell said.