Jamaica third after day one of CAJGC 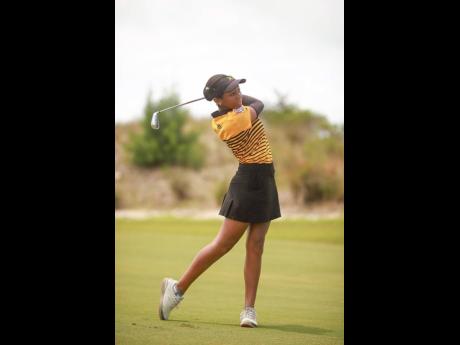 Jamaica’s junior golfers found conditions at the Punta Cana Golf course a little tougher than anticipated as the team currently lies third after the opening round of the Caribbean Amateur Junior Golf Championships in the Dominican Republic yesterday.

Jamaica’s 15-and-under player Aman Dhiman carded the only under par round, with his one under par 71, which sees him third in the category, behind leader Kurt Rivers of the Turks and Caicos Islands, who carded an opening-round four under par 68. The Jamaican team is second on 144 points, two shots behind leaders Puerto Rico.

In the Boys 18 and under, Rodino Lobban is the best-placed Jamaican in fourth place from his three-over-par opening round. Lobban trails Puerto Rican leader Gustavo Rangel by eight shots heading into today’s second day. The Jamaican team lies fourth in the category, 16 shots behind leaders Puerto Rico.

Aaron Ghosh shot a six-over-par 78 to be sixth in the Boys 13-and-under category to lead the charge for the team, which is in the fourth position, 11 shots behind leaders the Dominican Republic.

Girls captain Emily Mayne leads the charge on their side as her five over par 77 sees her lying in third place in the 18-and-under category, which is led by Darianys Guzman of Puerto Rico, who shot a one-over par 73. The Puerto Ricans lead the Jamaicans by four shots in the team category.

Winnie Lau is the best-placed Jamaican in the Girls 15 -and-under category as her eight over par 80 sees her lying in third place, and Samantha Azan had four double bogeys in her tough round of 16 over par, which sees her third in the 13-and-under category.

Jamaica coach Johnny Newnham is hoping the team can refocus for today’s second round.

“We had some positives across the board,” he said. “Not exactly where we want to be, but two more days to go. For the next two days, our job will be to focus on what we can control such as our attitude and effort. We need to commit to our process and let the results take care of themselves. We know what we are capable of, so it’s about going out there, trusting ourselves and believing in team Jamaica.”