‘Get that baton around’ 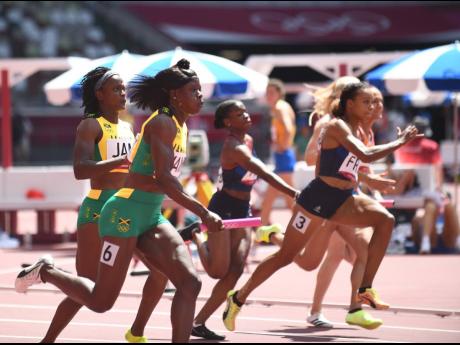 Gladstone Taylor/Multimedia Photo Editor
Shericka Jackson (foreground) collects the baton from Remona Burchell to snatch third place and a spot in the final of the 4x100m at the Tokyo Olympic Stadium in Tokyo, Japan during the Olympic Games, on Thursday. 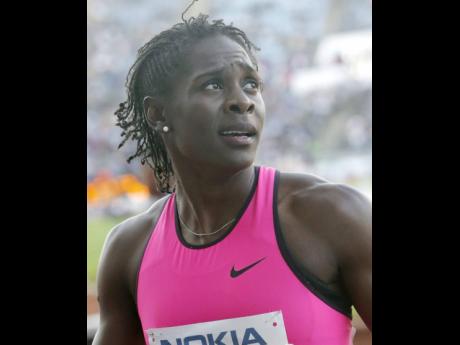 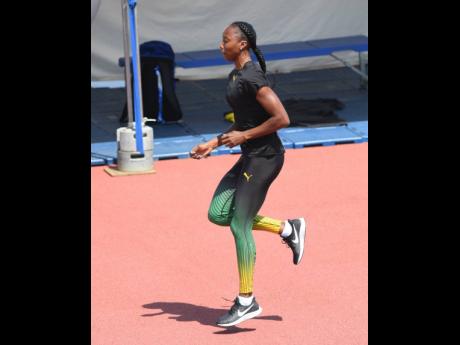 TOKYO, Japan: The last time Jamaica’s women entered a 4x100m relay final with three 100m medallists in the line-up was at the Beijing 2008 Olympic Games. However, dreams of a gold medal repeat in the event, following the country’s podium-topping...

The last time Jamaica’s women entered a 4x100m relay final with three 100m medallists in the line-up was at the Beijing 2008 Olympic Games.

However, dreams of a gold medal repeat in the event, following the country’s podium-topping finish four years prior in Athens, quickly turned into a nightmare for the Jamaicans.

Shelly-Ann Fraser-Pryce had led a podium sweep in the 100m that saw Sherone Simpson and Kerron Stewart sharing the silver medal. Added to the mix was the 200m champion, Veronica Campbell-Brown.

Surely, no one was going to beat this team.

In the end, no one had to as a mix-up on the second exchange between Simpson and Stewart led to the team failing to finish the race.

Jamaica has still not managed to win gold in the event since Athens 2004, but the Tokyo 2020 women’s 4x100m unit of Elaine Thompson Herah, Briana Williams, Shericka Jackson and the familiar face of Fraser-Pryce will be looking to correct that today in the final, which gets going at 10:30 p.m. (8:30 a.m. Jamaica time) at the Tokyo Olympic Stadium.

The individual foot speed of the Jamaican quartet has never been matched in a relay team, with the two fastest women alive, Thompson Herah – 10.61 seconds and Fraser-Pryce, 10.63 seconds – being supported by Jackson’s 10.76s, and Williams’ 10.97s speed.

The combination has excited athletics fans across the globe, with the United States’ 40.82 seconds world record from the London Olympic Games in 2012 under real threat.

Two women from the ill-fated Beijing team, Simpson and Stewart, spoke to The Gleaner about that night at the Bird’s Nest and encouraged the current cohort to focus on the baton and not allow heightened expectations to get the better of them.

“Firstly, I would like to wish them the very best,” said Stewart, who is now coaching in the United States.

“I believe the ladies are far more than capable of breaking the world record. Not to add any pressure, but when you have the two fastest women alive on the same relay team, naturally, the expectations will be high,” said Stewart, a three-time Olympic and five-time World Championships medal winner.

Simpson, who won three medals at the Olympic Games and three at the World Championships, believes that a strong 4x100m relay would be the perfect sign-off for the female sprinters after a season of dominating performances and an impressive Tokyo 2020 campaign.

“We have been doing extremely well in the sprints, and I know the ladies would want to finish things off with gold in the 4x100m relay,” Simpson said.

Simpson, the 2006 Commonwealth Games champion in the 200m, drew the parallels between both teams but believes that the outcome will be different this time around.

She warned the team to ignore talk about gold medals and world records and focus on the baton exchanges.

“After the one-two-two in the women’s 100m at the 2008 Beijing Olympics, we were the overwhelming favourites to win the 4x100m relay,” Simpson said. “I do think that this time around, the ladies will get the job done. Unfortunately for us in 2008, we did not get the baton around safely. This time, I want Jamaica to get the gold medal. The world record is also a big talk, but I just want the ladies to safely get the baton around.”

“In 2008, we did not feel pressured at all. We just wanted to execute, get the baton around safely, but unfortunatel, that did not happen.”

Stewart believes that it is important that the ladies be prepared to put what’s best for the team above themselves in order to maximise on the individual abilities.

“The team that we had in 2008, was truly a remarkable one, and the team we have now is truly, truly special,” Stewart said.

“As we all know, speed was never our issue when it comes to relays. Our true test will be doing what’s best for the team and ensuring that this takes precedence,” she added.

Stewart believes that the ideal line-up for Jamaica would be Williams starting and passing to the experienced Fraser-Pryce for the all-important backstretch leg. Thompson Herah would then attack the curve, with the powerhouse, Jackson, anchoring the team.

The Jamaicans will start from Lane 7.