Parchment asks for understanding for colleagues 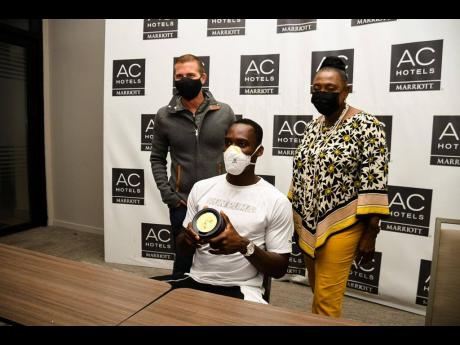 Parchment returned to the island via the Donald Sangster International Airport in Montego Bay, St James, yesterday but was then flown by private jet to St Andrew, where he was fêted at the AC Hotel.

Parchment’s request for understanding for athletes comes in the context of what many say is harsh public criticism of certain athletes who did not medal or advance to the finals of their sporting disciplines at the Tokyo Olympics.

Parchment himself had endured similar criticism throughout his career, having sustained multiple injuries and significant periods of inactivity after his first Olympic medal, a bronze in the 110m hurdles final at the London Games in 2012. However, public support has been favourable since his gold-medal win.

TOUGH BEING AN ATHLETE

“Just the support that everybody is giving me, I would like to see that for all the athletes as well,” Parchment said yesterday. “It’s tough to be an athlete. It’s tough to go out after months of preparation and not get the result that you wanted. So it would be really good for us, as a nation, to give the support to everybody and build that team spirit, so the next time we go out there, we will know that the support is strong and the support is real, and that should give an extra boost to us coming to making the finals, getting on top of the podium, and we can bring home more medals because we know that we have a strong base. I want to give thanks to everybody that keeps supporting me as an athlete, and I look forward to going out and bringing home some more championship medals.”

“I don’t know if many Jamaicans realise how hard our athletes work and how difficult, at times, their lives are, and the struggles that they have to go through, and when they go out there and run, they’re not just running as an individual, but they’re running for Jamaica,” she said. “Sometimes when it doesn’t work the way the people think it should, they criticise them, for if only they knew.

“Today, I want to make that special appeal to Jamaicans. The life of an athlete is not easy. Many athletes don’t even have the kind of comfort that many Jamaicans have, but yet they struggle and they train and train hard. When they triumph, we must treat them with respect and shower them with love. Today, we can’t say [to Parchment] ‘Thanks, enough.’

“We are so happy for you, and we’re happy for the country.”

Parchment described the trip to Tokyo as “fun,” saying he went out and enjoyed himself.