Mullings off to Arizona State 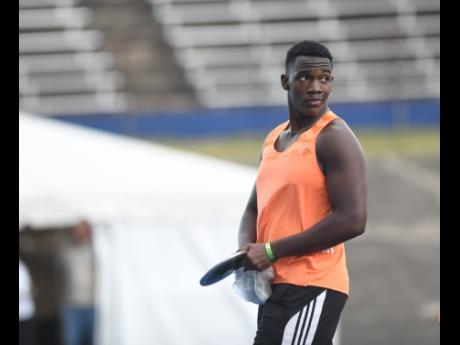 Gladstone Taylor
Ralford Mullings competing in the Under-20 Boys’ discus throw event at the JAAA National Junior Championships at the National Stadium on Friday, June 25. Mullings won the event with a throw of 66.61 metres.

World Athletics U-20 Championships discus throw runner-up Ralford Mullings will soon take up a scholarship at Arizona State University in the United States. Caniggia Raynor, who coached Mullings at Kingston College for the last four years, is...

World Athletics U-20 Championships discus throw runner-up Ralford Mullings will soon take up a scholarship at Arizona State University in the United States. Caniggia Raynor, who coached Mullings at Kingston College for the last four years, is confident that he will do well.

Mullings added 7cm to his lifetime best at the Championships in Nairobi, Kenya, with a second round throw of 66.68m. The mark made him the ninth best U-20 discus thrower in history and strengthened his hold on the number-two position on the all-time Jamaica junior performance list behind Traves Smikle, who threw 66.88 when he was in this age group.

He is the third Jamaican to win a medal in the discus after Fedrick Dacres and Kai Chang, who were triumphant in 2012 and 2018, respectively.

A winner of the ISSA/GraceKennedy Boys and Girls’ Athletics Championships Class One discus throw in May, Mullings is joining a strong team of throwers. Arizona State won both the men’s and women’s discus and shot put throws at the NCAA Championships in June through American Turner Washington and Jorinde van Klinken of the Netherlands.

Washington is the son of the 1999 World Champion Anthony Washington, and van Klinken is a Tokyo Olympian and the 2021 European U-20 champion.

“His ability to work hard, his drive, determination, and perseverance displayed throughout the four years I’ve been his coach, is a coach’s dream,” he said.

“What makes him unique to me is his ability to quickly make technical adjustments once we are able to identify the issue and have it fixed in the next throw,” he said. “There aren’t a lot of athletes that can do that. Most individuals will take multiple reps to make these technical adjustments. This ability largely contributes to his technical development, growth, and athleticism for the event. His work ethic has been consistent day in and day out, with or without injury, which inspires his teammates to make the same effort,”

The youngster’s best effort with the 2kg discus used by seniors is 58.99m.