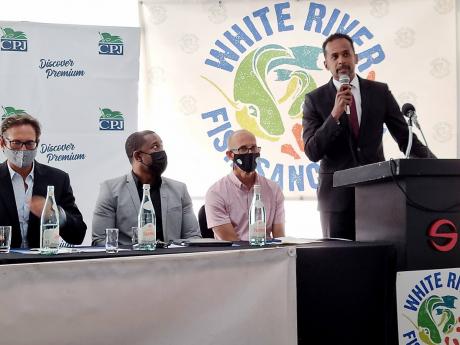 JAMAICA’s first open-water swim meet in two years, ‘Swim for the Sanctuary’, set for Saturday, November 6, at White River House Beach, Ocho Rios, has the aquatic community and partners of the event’s beneficiary, the White River Fish Sanctuary, all ready to take the plunge.

A Jamaica Inn Foundation fundraiser for the White River Fish Sanctuary, the event is open to participants ranging from nine years old to 60 and over, swimming in age-restricted races at distances starting with a 500-metre loop for youngsters.

The race distances are completed by a 1k, 2k, and 3k, in addition to a sprint relay, events which Race Director Alan Beckford described at the launch on Tuesday as having elicited “quite a bit of response from the swimming community”.

“Open-water swimming is a part of the Olympic Games and is one of the fastest-growing sports in the world,” Beckford pointed out, adding that Jamaica Inn Foundation conceptualising the event, to shore up the sanctuary’s funds, was good for local swimming, marine life and, by extension, the country’s all-important tourism product.

Beckford said whereas the inaugural Swim for the Sanctuary will be staged as a local event, due in large part to the COVID-19 pandemic, the aim is to make it a “fully international event” next year.

Kyle Mais, general manager, Jamaica Inn, and director of the hotel’s foundation, said getting on board partners, such as title-sponsor Caribbean Producers Jamaica (CPJ) and the Tourism Enhancement Fund (TEF), was relatively easy, a venture which also has the full blessing of the Aquatic Sports Association of Jamaica (ASAJ).

“It was a no-brainer in terms of supporting it after being approached,” said Georgia Sinclair, vice-president, ASAJ, pledging the entity’s support for 2022. “We will continue to support events such as these that enhance swimming in Jamaica and advance our mandate.”

With at least a dozen fellow sponsors in tow, CPJ’s commercial director, Rojah Thomas, and TEF’s executive director, Dr Carey Wallace, hailed the event as being a great initiative to protect the country’s marine life through the sanctuary’s 150-hectare operations.

“Outside of just being a corporate sponsor, it’s the right thing to do,” said Thomas, pointing out that it was in CPJ’s best interest in helping to protect the environment with his company being “the number-one provider of consumables to the hospitality sector”.

“Without preservation of the environment, we would have none of the niceties for tourists to enjoy,” Thomas noted, adding to sanctuary manager Reanne McKenzie’s revelation that 3,000 corals have been outplanted in four years and an achievement of “500 in five” biomass goal that has led to significant improvement of marine life.

Wallace said TEF supporting the event was in keeping with its mandate and fits the synergies of Destination Jamaica.

“It will help to highlight the work being done by the sanctuary, which is one of many that we support from Alligator Head (Portland) in the east to the Montego Bay Marine Park,” said the TEF head.

Entry fees for Swim for the Sanctuary are set at $1,000 per individual event and $2,000 per relay-team entry. Registration is open online at myraceresult.com/182010/ and closes Thursday, November 4.