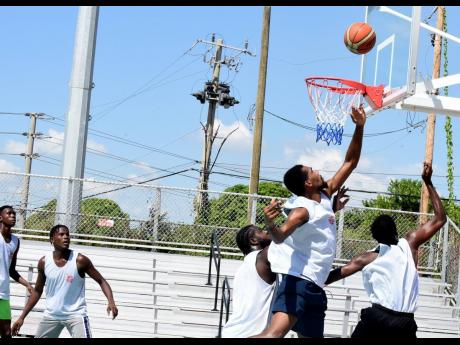 SATISFIED WITH the country’s landmark participation in one of basketball’s newest formats, the Jamaica Olympic Association (JOA) says it will continue to support the goals of its affiliates in the way it has backed the Jamaica Basketball Association (JABA) in sending teams to the FIBA Ameri-Cup 3x3 competition.

The JABA senior men and senior women’s national teams will participate in the tournament at Bayfront Park, Miami, from Friday through to Sunday.

This is the first time Jamaica will be fielding teams in any international 3x3 basketball event and its president, Paulton Gordon, outlined that it is a path to Olympic Games competition.

“This is the first phase of qualification for more advanced FIBA 3x3 events, which ultimately could lead to qualification for the Paris Olympics 2024,” said Gordon. “The tournament will attract 18 national male teams and 15 female teams, spanning North America, South America, Central America and the Caribbean.”

The JOA has given full support to the JABA to enable their participation in this inaugural 3x3 event, and Gordon stated that “it is apparent that this version of the game is becoming very popular, especially with urban populations and, as such, it is now a staple in all multi-games events”.

Commenting on the occasion, Ryan Foster, secretary general/CEO of the island’s parent body for sport, said: “The JOA is excited about Jamaica’s entry into this new version of basketball. We are enthused to have partnered with JABA to the tune of $1.2 million in their qualification bid for the Olympic Games.

“JABA has been making strides in not only this version of the sport, but in general with their training programmes, for which they also benefited from the Elite Coaching Programme introduced in 2018 by the JOA,” Foster commended.

Pointing to the recently concluded Olympic Games in Tokyo, Japan, Foster said such contributions can have a lasting impact on sport development.

“The JOA will continue to make meaningful contributions to our members and such contributions, we have seen, have had far-reaching impact, such as the first-time qualification of judo in Japan and boxing taking its rightful place on the Olympic stage after 26 years’ absence,” he observed.

“Our members are a big deal for us and the classification of ‘big’ and ‘small’ sports is not in our DNA. ‘Sports for All’ is now fully ingrained in our psyche.”

The FIBA Ameri-Cup 3x3 tournament will assist in ranking points leading to participation in other events such as the Commonwealth Games, CAC Games and the Pan American Games, which will place over the upcoming years leading to Paris 2024.

In the men’s category, Jamaica will play against Uruguay and Haiti in the group phase, to determine which team advances to the main draw. The women will match skills in group play against Guatemala, Guyana and Trinidad and Tobago, in their quest to advance to the latter phases.

Spectators will be allowed in Bayfront Park free of charge, and it is anticipated that the diaspora will come out in numbers to support the teams.