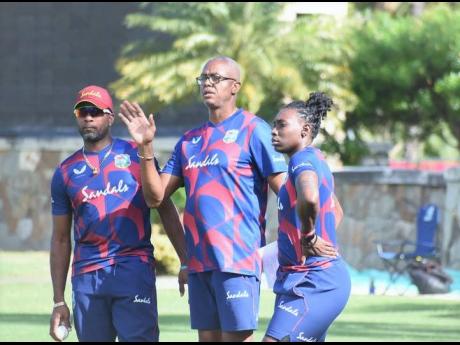 HEAD COACH Courtney Walsh has endorsed the decision by the International Cricket Council (ICC) to scrap the 50-over Women’s World Cup Qualifiers, but said West Indies Women were thrilled with their qualification for next year’s showpiece in New Zealand.

The ICC announced yesterday the tournament would not continue due to the emergence of the new Omicron variant of COVID-19, which had led several major countries to slap travel restrictions on southern African nations, including Zimbabwe.

While acknowledging the disappointment for all the teams involved, Walsh said player safety was of the highest importance.

“Yes it’s disappointing that the tournament had to be cancelled,” said the West Indies fast bowling legend.

“I’m sure all the teams here participating would be disappointed as it is a chance to put all your skills on show and especially the teams vying to get to the World Cup, there’s going to be disappointment.

“I think the right decision was taken by not putting the teams at risk, especially with the recent developments happening.”

Zimbabwe, along with South Africa, Botswana, Namibia, Lesotho, Eswatini, Mozambique and Malawi, have all been blacklisted by the United States, United Kingdom and several European Union nations.

The move followed the announcement by the World Health Organisation that the new Omicron strain, first identified in South Africa, was one of “concern”, with the US Center for Disease Control and Prevention warning about its “degree of transmissibility”.

West Indies played only a single game of the qualifiers when they trounced Ireland Women by six wickets last Tuesday.

Their second game scheduled for yesterday against Sri Lanka Women was subsequently abandoned without a ball bowled after a member of the Asian side’s support staff tested positive for COVID-19.

According to playing conditions, West Indies, Bangladesh, Pakistan – the highest ranked teams in the November 21 to December 4 tournament – will now progress to the World Cup scheduled for March 4 to April 3, 2022.

“We are obviously delighted that we have qualified and that we will be there at the World Cup next year,” Walsh said.

“The girls are very happy because that was one of the missions we wanted to fulfil when we left the Caribbean.

“We’re going to start planning and preparing for New Zealand 2022, but our main focus right now is to get the team back home quickly and safely.”

Only 11 matches of the qualifying tournament were possible before organisers pulled the plug and West Indies now face a potentially tricky route home with several countries closing their borders to flights from southern Africa or subjecting travellers to strict quarantine protocols.

The Caribbean side were forced to play the qualifiers after finishing seventh in the ICC Championship, with the top four and the hosts qualifying directly.