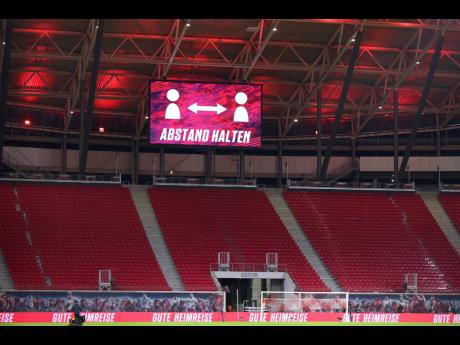 AP
‘Keep your distance’ is written on the scoreboard above the empty stands during the German Bundesliga match between RB Leipzig and Bayer Leverkusen, at the Red Bull Arena in Leipzig, Germany, on Sunday.

German politicians agreed yesterday to slash the maximum attendance at outdoor sports events to 15,000 people, though some states still plan to have empty stadiums.

Rising infection rates in recent weeks and the emergence of the new omicron variant of COVID-19 caused concern ahead of the talks between the state and federal leaders.

The decision to play a Bundesliga football game in Cologne last week in front of a crowd of 50,000 provoked particular ire ahead of plans for 67,000 to attend Borussia Dortmund’s game against Bayern Munich tomorrow.

That game will likely be played in front of a much smaller crowd. Dortmund anticipated that decision and said on Wednesday it would cancel and refund all the tickets it sold, and reissue some of them. Dortmund opened part of its stadium as a vaccination centre yesterday.

Smaller stadiums will be capped at 50 per cent of capacity if the total capacity is under 30,000.

Indoor sports such as basketball, handball, and ice hockey will have to contend with a maximum attendance of 5,000 people.