Mona’s Butler wants KC to throw all at St Catherine 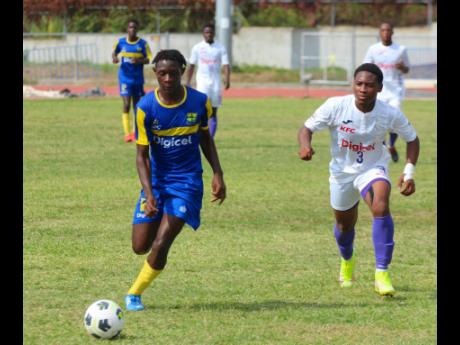 Friday’s result kept Mona High second on 10 points, but only on goal difference, ahead of St Catherine, who turned back Wolmer’s Boys’ 2-1 in the other group game. In the meantime, KC slammed Papine High 5-0 in the other game at the venue to stay atop the group with maximum 12 points from four games.

A result for St Catherine against KC would oust Butler’s team from the automatic second-place qualifying slot, and Butler is calling on the ‘Purples’ to play at full strength.

“This is our last game. We got the maximum points and we are in a position to play the second round, depending on how everything goes on Monday,” he said.

“We now have a plus-12 goal average to St Catherine (plus-five) right now. They (St Catherine) got a win against Wolmer’s and they will be very dangerous knowing they have a game against KC. And with KC already qualified, it is up to them to do the honourable thing and play to win, and not let through another school,” he stated.

At Stadium East, Clan Carthy started well and had some good chances, but Aaron Higgins failed to make the best of the opportunities.

Mona High soon assumed control and created a few openings, before they eventually broke the deadlock in the 29th minute when Shawnafi Smith score with a low shot from the top of the area.

One minute into the second half, Mona added to their lead when Matthew Hibbert netted the first of his two goals, to put them 2-0 up.

However, despite having complete dominance, Mona failed to add to their score until substitute Kashaine Gordon found the net with a fine strike, after a good build-up in the 84th minute.

Two minutes later, Hibbert broke away and slotted past Damaine Francis in goal to seal the win.

“The team that wanted it more won. But the indiscipline in my team let us down because we accepted back some senior players, but they didn’t play their part,” he said.