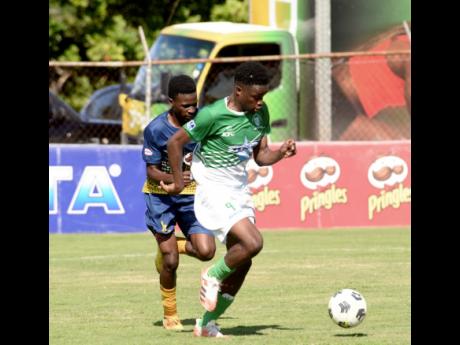 In the late game of yesterday's doubleheader, STETHS registered a comfortable 2-0 win over Vere Technical High.

"It's a good feeling for the school and myself. Remember, I am a new coach, so reaching the semi-finals of a knockout competition is really important for me personally," said Stephens, who credited former head coach Aaron Lawrence for his growth.

"Moving up to head coach was not difficult. Aaron Lawrence always believed in me. When he left for national duties, he never questioned my decisions. Whatever tactics or training plan I used he was always confident that I knew what I am doing," he added.

Akeem Kongal got the goal for Frome in the 67th minute. Stephens said they will have to improve on yesterday's performance in order to lift the Cup.

"I know we have more in the tank, so we will just have to go back to the drawing board and come again. We didn't play at our best as we usually possess the ball more and do more going forward," the Frome coach said.

Veteran coach of Munro College, Patrick 'Jackie' Walters, said they are disappointed at not being able to break what is now a 58-year title drought, but he believes they are not far off.

"Without a doubt, we are disappointed. I think the team played well but just didn't put away the chances. We have to understand that no matter how good you play or how much possession you have, if you don't make use of it (possession), you're going to be in trouble," Walters said.

"It's, however, a work in progress. We are not far off. Given the anticipated support of the past students and the school, I think next year will be much better," he added.