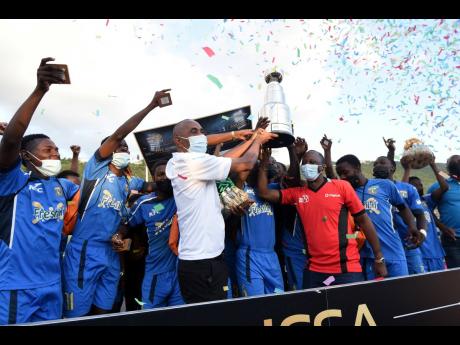 JUBILATION AND RELIEF. Those were the emotions that Clarendon College head coach Lenworth Hyde described after their ISSA Champions Cup match ended yesterday, defeating Dinthill Technical High 1-0 in the final at Stadium East.

Keheim Dixon scored the winner in the 53rd minute to complete the box set of schoolboy football titles won for the school, which became the second rural team to lift the trophy since the competition’s inception in 2014.

Both teams were beaten in the semi-finals of the daCosta Cup competition and sought redemption in what was the first-ever all-rural final in the Champions Cup. After seeing their rural crown slip, Hyde said it was a victory made special for the outgoing class which had helped the school to titles in the past.

“It didn’t take me anything to motivate them because it’s the last trophy we have a chance of winning. We have four players leaving this year. They were hell-bent on winning something before the season was up and they fought gallantly today,” Hyde said.

Until yesterday, it remained the title that seemed elusive for Hyde, coming close in 2019 but losing to Kingston College in that year’s final.

For Dinthill, the four-decade wait for a schoolboy football title continues, much to the disappointment of head coach Oneil Thomas.

While pleased at the overall performance of his team in their almost unprecedented run to the final, he lamented the lapse in composure from his players which, he said, had been a sticking point throughout the campaign.

“The indiscipline creeped in and the selfishness because that’s what we have been dealing with the whole season. That was one of the things that has been beating us all along,” Thomas said.

After a first half that saw both teams test each other, Dinthill came close to taking the lead five minutes after the restart. Daniel Roberts forced a great save from Clarendon College goalkeeper Okeemo Jones and the resulting rebound was headed on to the post.

But three minutes later, Clarendon would have the breakthrough after some hard work by a Clarendon player to keep a ball in play and cross. The shot from that cross was saved by the legs of Dinthill custodian, Matthew White. The rebound from that save fell to, or rather, was pounced upon by Dixon, who got there just ahead of two defenders trying to shut him out.

Despite Dinthill’s attempts to get behind Clarendon College’s backline, their passing lanes were blocked, forcing them to commit more players forward and leaving them vulnerable on the counter-attack.

On one of those counters, substitute Kristoff Graham almost doubled Clarendon College’s advantage but saw his header sail over the bar and seven minutes later, Jaheim Rose also put his shot over the bar.

Dinthill’s frustrations were compounded when Shamar Martin was sent off for a second yellow card in the 89th minute and, despite last-gasp efforts in stoppage time, could not force a penalty shoot-out.